For the low, low price of $150, you too can Spam Twitter to your heart’s content. A new software tool called Tweet Tornado allows its users to create an unlimited number of Twitter accounts, and do a host of other micro-blogging niceties. As I personally discovered a few days back, one problem Twitter has is its vulnerability to Spam of all sorts.

This latest news via Yahoo!, amplifies what may become a huge problem for Twitter in the weeks and months to come. Tweet Tornado, or programs like Magpie (explained by SitePoint’s Mihaela Lica), can actually render the whole platform useless in a worse case. 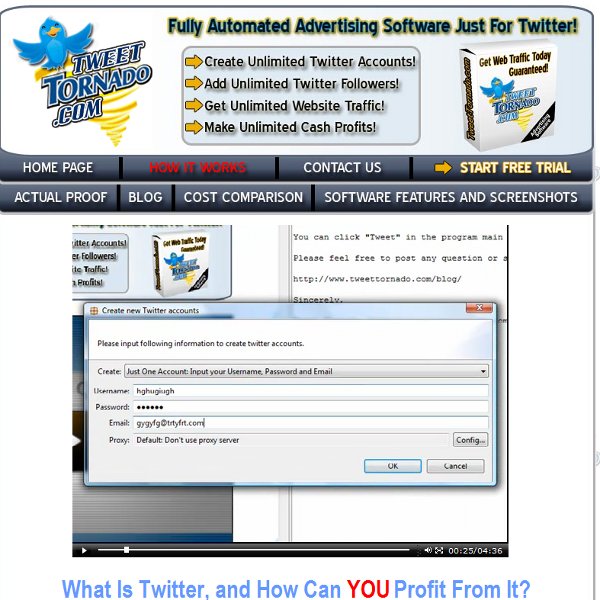 How to video showing form fill

Dancho Danchev of ZDNet reported on the release of the tool earlier. Danchev, an independent security consultant, suggested that Twitter simply start requiring a valid email address for signup, which seems like the most logical solution. Tweet Tornado takes advantage of this loop hole, and allows its users to create virtually unlimited fictitious accounts, and with the potential for unlimited followers for each. The resultant messages or Tweets represent something of a geometric progression of Spam obviously.

Tweet Tornado’s proof of concept profile, uncovered by Danhev, has already been deactivated, but as you can see in the screen from the TT site, the fictitious owner has an obvious following. Other TT site screens illustrate just how brazen the developers are, and how easily their tool can proliferate Twitter. From comparing themselves to Adwords to showing actual bandwidth increases, Tweet Tornado makes no bones about what they are doing. If Spammers have their way, Twitter users may soon be clicking their heels and chanting; “There’s no place like jaiku.” 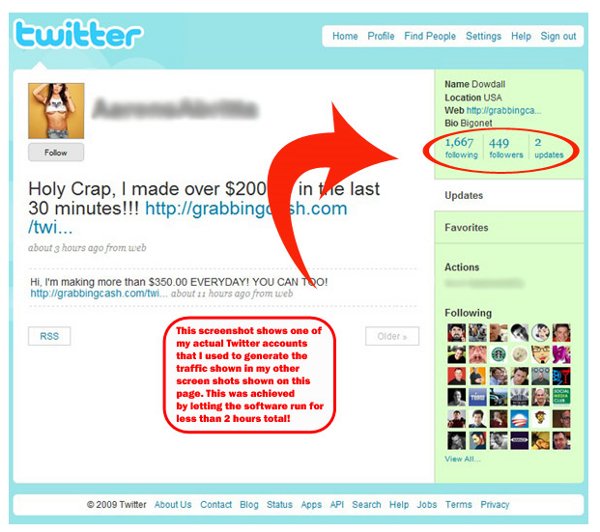 Blatant disregard for users, community and even a site’s TOS seem to be almost accepted behavior now. How can social networks survive under these and other stresses? Many will not if the user experience goes down significantly. Twitter is an interesting case study in not only what people want, but perhaps as a vehicle for a new type of marketing.

One thing is for certain, bogging the little bird down with junk salesmanship will eventually alienate even the most devout users. My bet is that Twitter is just biding their time, allowing a degree of this nonsense, until they close the flood gates and put a price tag on their millions of users. I hope this is the case for everyone who enjoys their service.

Authors Note: I purposely did not include a link to the Tweet Tornado site. For those of you who need to see for yourselves, or for shameless marketeers, it is not hard to find with a simple Google search.