As handy as email is for both personal and corporate communications, it's often not very secure. Your private data can be used by service providers for various purposes, such as targeted advertising, and is at a risk of being exposed to government agencies upon request.

Whether you're transmitting important documents such as confidential memos, patent designs, or even personal information, it's worth considering ways to better protect your privacy. One very interesting option is ProtonMail.

ProtonMail is a web-based, encrypted email service that was founded in 2013 at the CERN research facility. It's a free and open-source service, the code of which is available on GitHub.

ProtonMail uses client-side encryption to establish a zero-knowledge system, in order to enforce strict data privacy and protection for its users.

As ProtonMail is outside of US and EU jurisdiction, only a court order from the Cantonal Court of Geneva or the Swiss Federal Supreme Court can compel us to release the extremely limited user information we have.

In addition to this, ProtonMail ensures that your data stays on its servers, so that it is never exposed on the cloud. ProtonMail claims that its primary datacenter (which itself is guarded by multiple passwords on a system level) is located under 1000 meters of granite rock, in a heavily guarded bunker that can survive a nuclear attack. Apart from the fact that your data may survive a nuclear holocaust, this also ensures an extra layer of hardware security.

ProtonMail uses SSL for communication between its servers and your computer. Although message data is already encrypted before being sent, SSL adds an extra layer of security, preventing man in the middle attacks. ProtonMail requires two passwords — one for signing in and one for decrypting your mailbox. The latter cannot be recovered if you forget it.

ProtonMail doesn't require any information that can be used to personally identify an account holder while signing up. Also, it doesn't track or record information such as the user's IP address. Since your emails are encrypted, there's no way even for the staff to read your emails.

Secure Communication With Other Email Providers

Communication between ProtonMail users is encrypted by default, which is denoted by the presence of a blue-colored lock icon. In addition to this, ProtonMail also supports sending encrypted emails to other email providers such as Gmail, Yahoo and AOL via symmetric encryption. This is sent in the form of a hyperlink, which the recipient receives in an email. Here is a screenshot of the encrypted mail that I've sent from my ProtonMail account to Google Inbox: 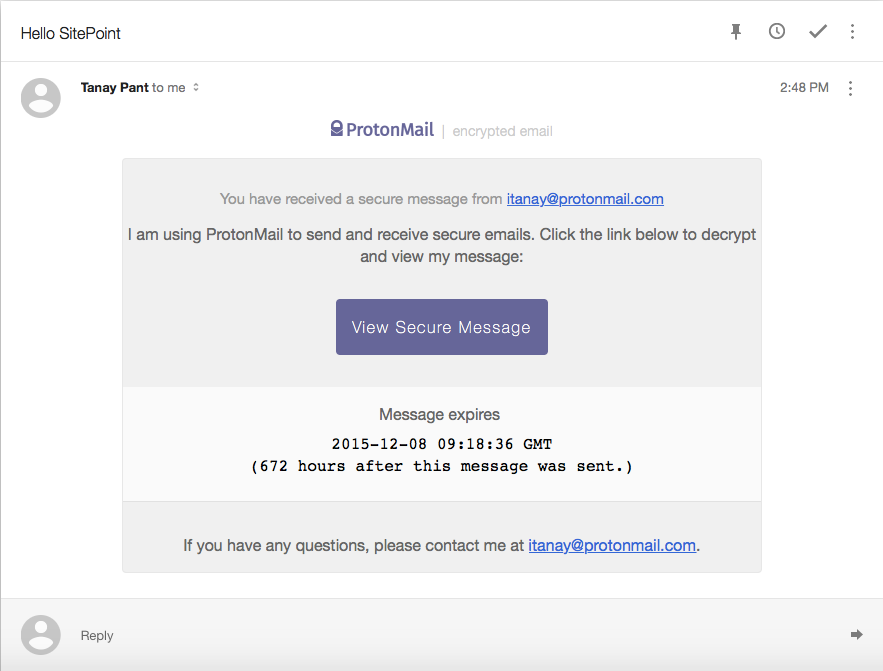 The recipients are asked for a passphrase (to be shared via a secure channel) which is used to decrypt the encrypted message:

Upon correctly entering the passphrase, the message gets decrypted and is displayed as shown in the following screenshot: 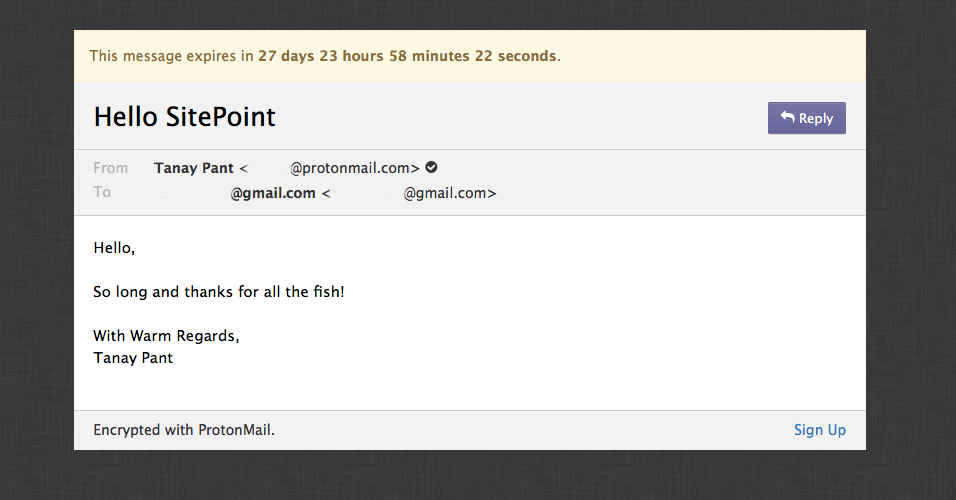 There's an additional feature that distinguishes this secure email service from its competitors. Encrypted emails can be set to automatically self-destruct in the recipient's mailbox after a certain amount of time. This feature only applies to the encrypted emails sent to the non-users of ProtonMail (regular emails sent to non-ProtonMail users cannot be marked for self-destruction).

Currently, invitations have to be requested for setting up a new account at ProtonMail. The signup page says:

Due to high demand, we have hit our capacity limit. We are adding servers constantly and will send you an invitation as soon as possible. 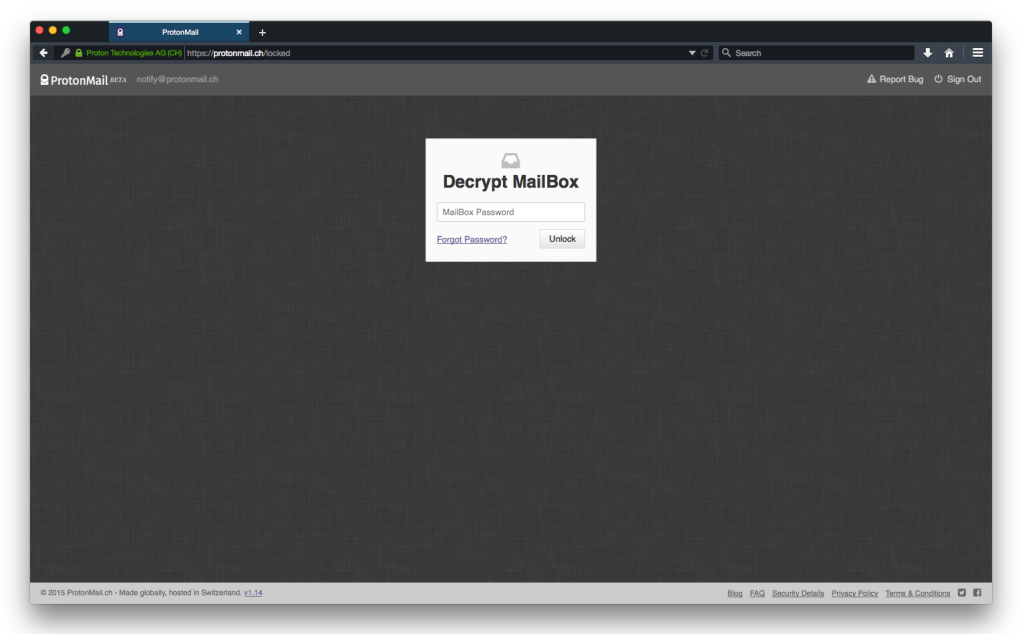 I got a reply to the invitation request within a week. It asked me to set up two passwords. One password was for logging in to the account. In case you forget this password, a password reset link can be sent to your alternative email. Then it asked me for a password for encrypting my mailbox. This password cannot be recovered if you lose it, so take care. 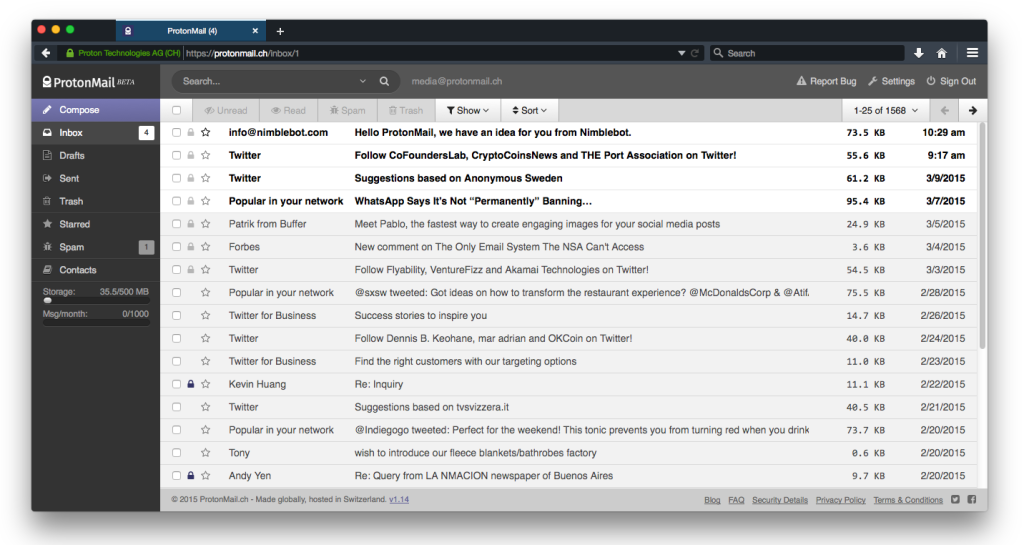 Once you decrypt your mailbox and log in, you have a number for utilities available for jump starting your regular work. You can import your contact book to ProtonMail in either .vcf or .csv format. I was a Gmail user, so I was able to export my contact list via Google Contacts and import it to ProtonMail. 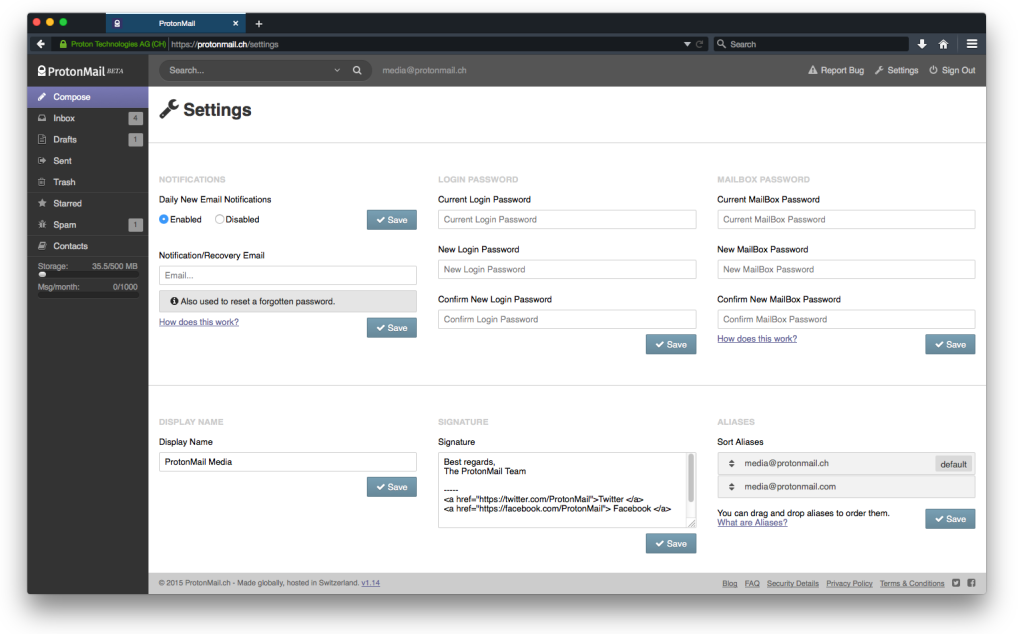 In the settings section, you can set your signature as well as your display name via the Account Settings tab. The Security tab allows you to keep records of the Authentication Logs for your mailbox, so this helps you to monitor who has accessed your account and from which IP address. The Appearance tab helps you to tweak various options, including a field to set up a custom CSS theme for a tailored look.

On November 3rd, 2015, ProtonMail was hit by a very powerful DDOS attack that took the service offline for a few days.

ProtonMail recently started a GoFundMe crowdfunding campaign to raise $50,000 to help pay for systems to defend it against future attacks of large scale.

According to its Transparency Report (September, 2015), five out of five requests to access user data have been denied by ProtonMail. It was even featured in the highly popular television show, Mr. Robot (Season 1 Episode 8). ProtonMail is all set to launch its Android and iOS applications by the end of 2015, and invites for the beta versions of the mobile applications are available for $29 each.

ProtonMail has been widely appreciated in the popular media for its efforts to establish a secure, private and open-source messaging platform. I believe that end-to-end encrypted messaging services with open-source infrastructure like ProtonMail will form the basis of future professional communication systems.

Having said that, I feel that it's difficult for individual users to leave a familiar email ecosystem for a more secure one, and for the corporate users to shift from Google for Work. Let's see which side wins: Security/Privacy or Feature-Completeness/Familiarity.

Have you used ProtonMail so far? If yes, will you continue to use your old email account? If no, what are your concerns for not switching to ProtonMail?

Meet the author
Tanay Pant
Tanay Pant is an Indian author, hacker, developer and tech enthusiast. He is known for his work on Learning Firefox OS Application Development, which was published by Packt. He is also an official representative of Mozilla, and has been listed in the about:credits of the Firefox web browser. His personal website is tanaypant.com.