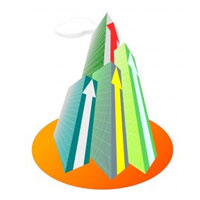 Edion ran hard and fast from the beginning, clocking up over $1 million in sales in year one, and around $3 million in year two. However our sales plateaued and I simply couldn’t solve the problem.

After much deep thought and discussion with customers, I came to the conclusion that our customers weren’t purchasing our service; instead they were purchasing our people.

My people had serious reputations and that’s what was being chased by my customers; who would rather wait until a consultant became available (in one case up to six months) rather than use someone else.

I didn’t know how to solve this problem of scalability, it seemed to be inherent in the business. And that was my clue.

On discussing the issue with a psychologist friend of mine, he suggested something that has stayed with me ever since. Maybe Edion wasn’t meant to be expandable; maybe I should just extract maximum cash from it and invest those funds into something else.

I have realized since that I wasn’t an orphan with this problem, in fact I often run into people that are selling a product or service and finding it hard work. They seem to have three main problems:

If this sounds like you, then this strategy advice could come in handy.

What makes for a scalable business is a different discussion, however it’s not that hard to figure out. Have a look around at any business that has made an idiot wealthy and you will spot most of the attributes of a scalable business (such as mobile phones, fast food, ISPs, petrol).

How to Gain Traction with Data PointsTheo Miller