Apple has released a public beta of its Safari 3 browser for Windows. It’s a small download, its rendering of pages is fast, and it comes with all of the features and elegant user interface tweaks (love that text search bubble effect) that make Safari such a popular browser among Mac users. 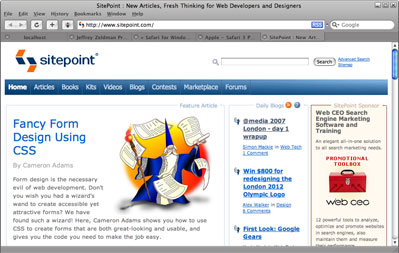 What stands out for me though is the fact that it doesn’t utilise any of the standard operating system conventions–the browser chrome, scroll bars, buttons, menu fonts and user interface conventions for resizing the window all arrogantly snub the Windows API and provide a very Mac-like interface instead. If it wasn’t for the three buttons in the top right, you could be mistaken for thinking that you were running an OS X application!

In fact, some of the pages I loaded in Safari for Windows looked so much like those rendered in Safari on my Mac that I decided to dig a little further
Joel Spolsky has a good write-up on why the fonts look different between Safari and other Windows apps: the rendering algorithms are completely different.

For web developers, this is gold! Potentially, Safari for Windows really could be a reliable tool for web developers who use a Windows platform to test how their sites render in Safari/Mac … without having to buy a Mac. Goodbye, Swift!

Being beta, however, there are still a few issues to address. Alex didn’t have quite as much luck when he installed Safari on his Windows machine–none of the fonts loaded at all, although I haven’t experienced any problems on my machine yet:

So, beta glitches aside, what do you think? Is this is a smart move by Apple (get exposure and breed familiarity of the OS X interface to Windows users, through iTunes and Safari? Or is it a mistake (snubbing operating system conventions could lead to extreme confusion for users). Will anyone other than web developers and geeks bother using Safari? Could you survive without your Firefox extensions? And is this a Good Thing, or just another damn browser to test for?

Meet the author
Matthew Magain
Matthew Magain is a UX designer with over 15 years of experience creating exceptional digital experiences for companies such as IBM, Australia Post, and sitepoint.com. He is currently the Chief Doodler at Sketch Group, Co-founder of UX Mastery, and recently co-authored Everyday UX, an inspiring collection of interviews with some of the best UX Designers in the world. Matthew is also the creator of Charlie Weatherburn and the Flying Machine.