Top of the hour this week, is the story that the Pirate Bay has been taken offline following a raid by Swedish police. The last time that happened a lot of people were up in arms and many protests ensued. This time however, no one really seems to care, even when it was reported that they may remain offline for good.

Staying with illegal activities, the aftermath of the Sony hack continued, with all kinds of things being leaked to the internet. This included, but was not limited to: plans for new movies, celebrity phone numbers, celebrity aliases, embarrassing company emails and the salaries of its executives. Sony has also come in for sharp criticism from security companies for letting this attack happen, an attack that it seems could have been carried out by North Korea.

Finally, it was announced that the purchase of Bitcoin is not subject to sales tax in the US, which was good news for one company that successfully bid for 48,000 Bitcoins seized from Silk Road earlier this year. Bitcoin Black Friday was hailed a success, Microsoft announced that they now accept Bitcoin, and in the face of rising adoption, we were reminded that there are very tangible benefits to using the cryptocurrency. Bonus link: here’s a infographic highlighting the good, the bad and the future of Bitcoin for business. Yay for infographics!

Node.js is Well and Truly Forked

The big news from Node.js land this week is the fact that the project has been forked by a group headed by some of Node’s primary developers. The fork goes by the name of iojs and happened as the group was unhappy with the stewardship of Node’s official sponsor, cloud computing company Joyent.

Reaction to the forking has been mixed, with some claiming Node’s future is in serious doubt, whilst others are urging people to stay calm and look at the bigger picture.

Oblivious to the fuss, npm (Node’s package manager) released a series of videos detailing how to use npm, how to install and manage packages, fix permissions, and more.

Here’s an insightful article on how to design a RESTful API with Node.js and Restify.

Streams are one of the more powerful features of Node. Here’s an introduction to what they are and how to use them.

If all this talk of Node has made you curious to try it out, here’s a (very) in-depth guide to getting started with the server-side framework, as well as a list, by the same guy, of the top ten mistakes Node developers make.

Let Me Take You to the Stars

Meteor (the open source platform for building modern web apps in pure JavaScript) recently reached its milestone 1.0 release. Having taken it for a test drive, SitePoint author Ciara Burkett wants to show you nine ways it’ll take you out of this world. I guess she was impressed, then …

A meteor developer decided to scrape all the Meteor apps he could find online and extract some statistics. His findings make for interesting reading.

In a tip of the hat to the previous set of links, the meteor podcast examined the forking of Node.js and what this means for the meteor community (it could be said that Meteor is to Node what Rails is to Ruby).

If you want to add comments to your Meteor app, here’s how you can do that.

Here is a good list of pitfalls to avoid when writing a Meteor app as well as a handy list of tips and workarounds.

And something to help you get through your Friday: a tiny drum machine written in Meteor (which I found surprisingly addictive).

Buzzword of the Week: Page Bloat 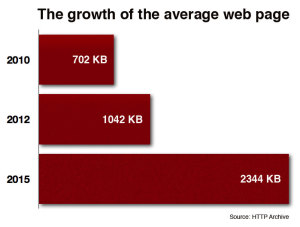 Over the past decade and a half, the size of the average web page has ballooned to more than one megabyte. This phenomenon is known as “page bloat” and is primarily caused by images and third party scripts being included willy-nilly by website owners. Page bloat particularly hurts mobile users and users with a slow internet connection.

One way to combat page bloat is to establish a performance budget for your website. It’s not that complicated to do and in fact, planning for performance can bring all kinds of benefits.

Planet Performance is publishing one article a day in the run-up to Christmas detailing how you can improve your website’s performance. This article on optimizing images is my favorite so far.

One of the techniques that article mentions is spriting (multiple images combined into a rectilinear grid in one large image). Here’s how to implement CSS Sprites with Sass and Compass.

If JavaScript is more your thing, you might want to check out the following quick JavaScript changes you can make today for better web performance.

Finally, here’s a well-written article offering further tips on how to optimize your website for speed (and explaining why you still should).

WordPress 4.1 is almost upon us (the release date is currently 16th December) and there seems to be plenty to get excited about. This article on Web Designer Depot gives you the lowdown.

I’m sure you’ve all heard of Google’s reCAPTCHA, well now several plugins have sprung up to help you add it to your WP websites with a minimum of fuss and configuration.

And while we’re talking about spammers, one of the tricks they employ is to register accounts with disposable email addresses. SitePoint author Agbonghama Collins takes a look at how you can put a stop to that.

WordPress 4.1 brings with it a new default theme: Twenty Fifteen. If that’s not for you, here’s an article on what else to consider when choosing your next theme.

WordPress is here, there and everywhere (or so it seems). Here’s a look at what it will take to dethrone the king of CMSs (spoiler: a lot).

Finally, Storytime is Rails 4+ CMS and blogging engine. Installing it is a simple as add gem "storytime" to your gemfile (well, almost …)

I’ll leave you with the news that accomplished actor Christopher Lee (who played Saruman in Lord of the Rings) is adding “rock god” to his resumé, with the release of his third heavy metal Christmas single. Elsewhere Barack Obama has become the first ever US president to write a computer program and the stark revelation was made that the Orion spacecraft is no smarter than your phone.

Also, our benevolent overlords at SitePoint HQ recently asked a bunch of SitePoint authors what developer toys they would like for Christmas. They then managed to source them — without relying on Santa. Each of the items that the authors asked for can be won by the best comment in the respective posts. Here’s one of the things I asked for. You can see what the other authors wanted over on the main site.

So which links caught your attention? What do you think about the happenings in Node land? Is page bloat something you’re worried about? Do you have any experience using Storytime? Either way, we would love to hear your thoughts.