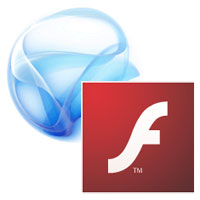 The theme for the latest episode of the SitePoint Podcast was the pros and cons of web application development and deployment on rich media platforms like Flash and Silverlight.

A lot of people believe that desktop applications are migrating to the cloud and the computing experience of the future will be one in which we interact with programs that are actually running and storing our data elsewhere. Adobe and Microsoft, with Flash and Silverlight respectively, are among the leading candidates to provide the development platform on which many of these next generation rich Internet applications will be built.

However, even though adoption of Silverlight has been good, and Microsoft claims that some version of their 20-month-old technology is installed on 25% of web connected computers, that’s still a drop in the bucket compared to Flash. Flash is near ubiquitous, and Adobe claims its install base is over 98% of web connected computers — or about 4 times larger than Microsoft’s install based for Silverlight.

Still, Microsoft is actually innovating quite rapidly with Silverlight, with plans to release version 3 of the RIA technology next year. And because of Microsoft’s strength in the enterprise, they’ve been able to score a large number over high profile deployments for Silverlight over the past couple of years. It’s not out of the realm of possibility that Flash and Silverlight could be on more equal footing when it comes to user reach by the end of 2009.

Last week on Hacker News someone posed an interesting hypothetical. If Silverlight had the same install base as Flash, which would you use? We’d love to hear your responses, so vote in our poll and let us know in the comments why you voted the way you did.

Creating a Simple Twitter Client with Silverlight and PHPAndrew Gardner