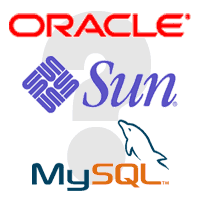 Much to the industry’s surprise, Oracle has bought Sun Microsystems for $7.4 billion following the breakdown in talks with IBM. Sun’s future appeared to be uncertain and few expected Oracle to be waiting patiently in the wings (although it does explain why Sun was prepared to walk away from IBM’s offer).

There are several good reasons why Oracle wanted Sun…

Whilst MySQL and Oracle are not exactly direct competitors, those of a more cynical disposition would expect Oracle to kill off the competing database. That could be difficult since MySQL is open-source and anyone can contribute to the application. However, Oracle could starve the project of resources.

It is also possible that Oracle do not want MySQL, perhaps because of anti-competition laws? They could “sell” MySQL to another company – would IBM still be interested?

However, I suspect Oracle will prefer to keep MySQL; they will control an even larger segment of the database market and can tap into the existing user base. They may provide further investment and create tools that enhance the relationship between the two systems, e.g. an easy upgrade path for those requiring more powerful database facilities.

Unfortunately, many of the MySQL leaders and developers have left Sun following the company’s structural and financial problems. Michael Widenius, founder and original developer of the database, has announced that he will hire all core MySQL personnel and fork the project to create an independent and true open source entity. He is prepared to work closely with Oracle to ensure MySQL is actively developed in an open manner with the trust and support of customers, developers, and users.

Whatever happens, the future of MySQL appears to be assured. However, the direction the project will take is uncertain and who knows what Larry Ellison is planning?