Opera 10, the latest version of the world’s #5 browser (Google’s Chrome has overtaken it according to NetApplications), was released in beta earlier this month. One unintended consequence of being the first web browser to put out a double digit version numbered release? A lot of web sites have broken due to a bug with their browser detection code reminiscent of the “Y2K” bug.

According to Hallvord Steen, who works as a part-time Quality Assurance developer at Opera, a number of web sites have faulty browser detection schemes that assume a web browser’s version number will only have one digit. That causes a problem when detecting Opera 10, which of course clearly has more than one digit.

“If websites assume that version numbers always have a one-letter “major” part and look for a single digit, they are going to “detect” Opera 1!” writes Hallvord. 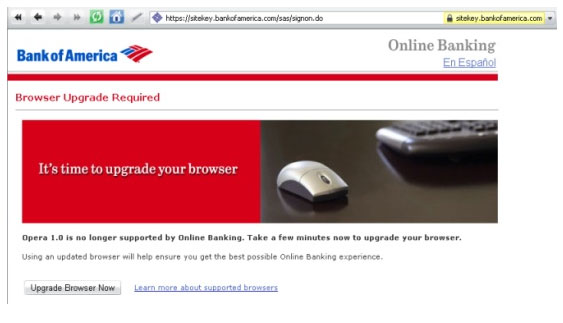 So many web sites, including heavily trafficked sites like Microsoft’s Live Mail and Bank of America, are reading Opera 10 as Opera 1.0 and assuming that the browser isn’t supported. As a result, users of one of the most standards compliant and up-to-date browsers on the planet are instead greeted with messages urging them to upgrade to a better browser. Microsoft’s page, for example, suggests that users switch to Internet Explorer, Safari, or Firefox.

This is something that web developer Andrew Gregory predicted would happen in a blog post back in May.

Unfortunately, this reflects poorly on Opera, even though it is the fault of shoddy programming on the part of some web developers. Many users will undoubtedly blame the problem on Opera when the same sites works perfectly in other browsers. In reality, though, this isn’t Opera’s fault. Does your site’s browser detection work with Opera 10?