Developer tools help you find and fix rendering issues, but what about efficiency: are our file sizes as small as they can be? For that, we need minification tools.

Minification in the context of CSS simply means removing excess characters. Consider, for example, this block of code:

Now our CSS is only 80 bytes long and 18% reduction. Fewer bytes, of course, means faster download times and data transfer savings for you and your users.

In this section, we’ll look at CSS Optimizer, or CSSO, a minification tool that runs on Node.js. To install CSSO, you’ll first have to install Node.js and NPM. NPM is installed as part of the Node.js installation process, so you’ ll only need to install one package.

Using CSSO does require you to be comfortable using the command-line interface. Linux and OS X users can use the Terminal application (Applications > Terminal.app for OS X). If you’re using Windows, utilize the command prompt. Go to the Start or Windows menu and type cmd in the search box.

Once you have set up Node.js and NPM, you can install CSSO. At a command line prompt, type: 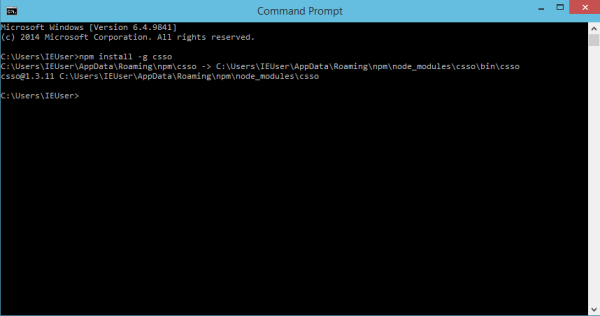 Once complete, CSSO will print the optimized CSS to standard output, meaning the current terminal or command prompt window. In most cases, however, we’ll want to save that output to a file. To do that, pass the second argument to csso the name of the minified file. For example, if we wanted to save the minified version of style.css as style.min.css, we’d use the following:

csso style.css style.min.css
By default, CSSO will rearrange parts of your CSS. It will, for example, merge declaration blocks with duplicated selectors and remove some overridden properties. Consider the following CSS:

h1 {
color: #ff6600;
}
In this snippet, margin-left overrides the earlier margin declaration. We’ve also repeated h1 as a selector for consecutive declaration blocks. After optimization and minification, we end up with this:

Now, if youâ€™re skeptical of how CSSO will rewrite your CSS, you can disable its restructuring features. Just use the --restructure-off or -off flags. For example, running csso style.css style.min.css -off gives us the following:

Preprocessors, introduced in Chapter 9, offer minification as part of their toolset; however, using CSSO can shave additional bytes from your file sizes.