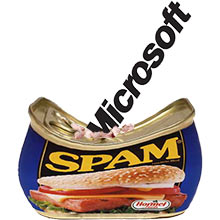 Here’s a great story for anyone suffering from inbox overload. 1.5 billion fewer spam emails will be sent today thanks to court action instigated by Microsoft.

Operation b49 was Microsoft’s codename for the investigation into Waldec, a spam bot network which controlled an estimated 90,000 PCs. The company discovered the source of the controlling servers with help from Symantec, intelligence organization Shadowserver, and the University of Washington. A lawsuit was brought against 27 unnamed criminals which sought a restraining order against 273 web domains.

The court ordered Verisign to temporarily take down the domains; the first time domain shut-downs have been used to disable spam networks. The entire operation and court action was kept secret to ensure the spammers did not switch domains, destroy evidence or initiate alternative techniques.

The bots had been responsible for sending 650 million emails to Hotmail accounts during an 18-day period in December 2009. That’s storage space Microsoft was paying for; they certainly had commercial justification for their action.

This was a worldwide problem and we scored a big, big victory.

Response from the security industry has been mixed. Several experts have stated Waldec was not a major threat and accounted for less than 1% of all spam. Anti-spam service Spamhaus reported that the action had little effect on daily traffic. It should also be noted that the Waldec-infected PCs have not been fixed; spammers could still find a way to resurrect the bots.

This victory may not win the war against spam, but everything helps. If only Microsoft could only stop spammers infecting PCs running their OS…