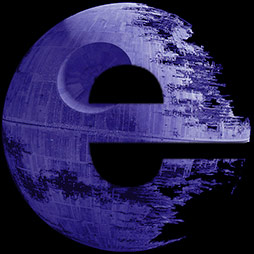 The browser developers love to hate is being rebuilt. Microsoft started work on Internet Explorer 9.0 a few weeks ago and showed off some of the new features at their Professional Developers Conference in Los Angeles. So what can we expect?

IE9 will offer CSS3 selectors and rounded corners (it’s about time). JavaScript performance will also be improved, although Microsoft has a long way to go before they catch up competitor’s browsers.

IE9 will support hardware-accelerated text and graphics using Microsoft’s new Direct2D (D2D) system. D2D utilizes Windows DirectX to improve client-side rendering. It will be used by default, so developers will not need to change their CSS or JS code libraries. The result will be sharper text, better graphics and smoother animation using fewer system resources (much of the rendering effort will be handled by the graphics processor).

Our goal is to deliver better performance across the board for real-world sites, not just benchmarks.

Although would Dean be saying that if IE wasn’t languishing at the bottom of the benchmark tables?!

No IE9 release date has been announced but I suspect it’s at least a year away. More importantly, I hope Microsoft does not drop support for Windows XP. The OS may be ageing, but it’s still the most widely-adopted version of Windows. If IE9 supports Vista/7 only, it’ll be another reason for users to stick with IE6.

Personally, I’m glad Microsoft is continuing to upgrade Internet Explorer. Are you? Or will it simply add another version of IE to your increasingly long browser test list?