In what is increasingly becoming a war of words between Microsoft and Adobe, the two companies seem to time announcements about Silverlight and Flash respectively in an effort to steal the other’s thunder. Last night, a few hours before the embargo lifted on a bundle of announcements Adobe was making at their annual MAX conference, Microsoft’s corporate vice president of the .NET Developer Division Scott Guthrie put out a post on his blog about the state of Silverlight and hinted at upcoming features in Silverlight 3, which should ship next year.

Guthrie was obviously very positive on Silverlight and the strides Microsoft has made in 2008 in getting the browser plugin out onto consumer machines. According to Guthrie, since the release of Silverlight 2 last month, the plugin has been downloaded over 100 million times, and some version of Silverlight is installed on 1 in 4 web connected computers. That’s pretty good for a technology that initially debuted under 20 month ago.

Guthrie also took some direct shots at Adobe’s competing Flash technology. “In the August 2008 edition of Web Designer Magazine (a Dutch publication) a [Dutch television network] representative reported that they were able to serve 100,000 concurrent users using Silverlight and 40 Windows Media Servers, whereas it would have required 270 servers if they had used Flash Media Servers,” he wrote. Guthrie also specifically noted that Flash is being replaced by Silverlight in Blockbuster’s MovieLink application.

One of reasons Microsoft is in a position to be able to take on Adobe’s Flash, which has an 11 year head start and nearly ubiquitous deployment, is the strength the company has in the enterprise. Microsoft has been able to lean on its corporate partners to score some high profile deployments of Silverlight very quickly, including at NBC, Netflix, AOL, Toyota, and Akamai. There aren’t many companies that could do that and push out a new plugin so quickly. (Google comes to mind as another who has the muscle to get it done — and Steve Gillmor recently suggested that they may actually be headed into the fray as well.)

In his post Guthrie also hinted at some features in the upcoming version 3 release of Silverlight, that should drop next year. According to Guthrie, Silverlight 3 will include:

Guthrie says that further new features will be announced closer to release. In addition, Guthrie notes that new versions of Visual Studio (pictured below) and Visual Web Developer Express coming next year will include fully editable and interactive design tools for Silverlight, as well as new data-binding tools. Though it’s hard to tell, it appears that Visual Studio might be inheriting some features of Microsoft Blend.

Blend is a UI design tool for WPF and Silverlight projects that might be looked at as the Microsoft equivalent of the Adobe Flash Catalyst tool launched today (our coverage), though it seems less polished in my opinion, despite being older. (Though, I’m a writer, not a coder or designer, so take that opinion as you will.) Blend already supports seamless transition of code between it and Visual Studio, but it appears that Microsoft might be taking that a step further by integrating Blend-like UI design tools directly into Visual Studio. 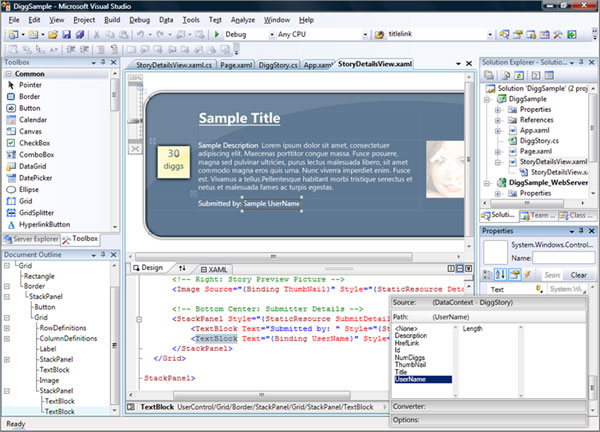 Update: True to form, as I was writing this post Adobe’s PR department emailed me to let me know that Major League Baseball has signed a 2-year agreement stream video via its web site using Flash starting in 2009. The MLB currently uses Silverlight to stream live video, though their system requirements also list Flash player as necessary, so it’s hard to tell if this is a full shift to Flash or not.

Either way, the war of words is in full swing today (no pun intended).

Update #2: I just got off the phone with Jen Taylor at Adobe who confirms that MLB.TV will switch to Flash starting next year for live video streaming. The reason the MLB.com system requirements page lists both Flash and Silverlight is that Major League Baseball has been using Flash for other multimedia content delivery already (just not for the MLB.TV live streaming service, where it utilized Silverlight last year), and the requirements page likely covers the entirety of the MLB web site.