Business social networking site LinkedIn has launched a new advertising feature called DirectAds that allows the site’s members to buy targeted text ads. DirectAds was launched in a limited beta a couple of weeks ago, and opened to the full site last night. In an announcement blog post, Product Manager Jack Chou, introduced the new service as an alternative method of advertising on the site (to going through their sales team) for individuals and small businesses.

DirectAds is a nearly identical product to one that Facebook has had in place for a couple of years called “Flyers” initially and “SocialAds” since last fall. Basically, both systems allow members of the site to buy targeted text ads — on a CPC or CPM basis at Facebook, and on a CPM basis at LinkedIn.

On Facebook, the results have been mostly poor. In March of 2007, Valleywag reported a dismal 0.04% CTR for Facebook ads, a number that was sadly better than what venture capitalist Fred Wilson saw 8 months later. Charlene Li got a very respectable response rate of 2.76% with Facebook flyers, but that seems to be the exception rather than the norm (and she wasn’t selling anything). 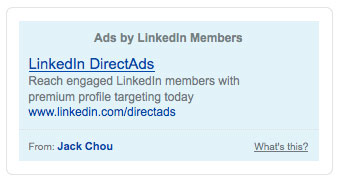 On LinkedIn, the results will likely be markedly better. Because the average household income on the site is $109,000 and the site’s members are there for work and not play, LinkedIn is already selling CPM ads at a $50-75 CPM. Even though mainstream social networks like MySpace and Facebook have tens of millions more members than LinkedIn, their user base is less attractive to advertisers because it is more focused on making social connections and less tuned to business propositions.

Jack Chou says it all in his blog post:

For example, maybe you’re a tax accounting firm looking to reach young professionals, or you’re a design agency looking to find potential new clients in key industries, or maybe you’ve just written a new book on a career or business topic. You can use DirectAds to get the word out to your target customers.

We added emphasis to the key word there: customers. On LinkedIn, users are customers, on Facebook and mainstream social networks, they’re “friends.” DirectAds are also very transparent, linking the ad to the profile of who posted it. Because anyone placing an ad will have their professional reputation tied to it, it is likely that instances of spam or abuse of the system will be few and far between.