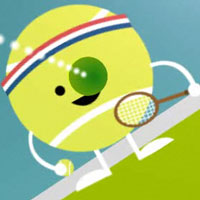 The way it works is simple: two talented graphic designers pass a graphic file back and forth over the course of ten “volleys” (rounds), each modifying or adding to the graphic at each pass, generally using Adobe Creative Suite 4 (Adobe is sponsoring the upcoming season). Designers have 15 minutes to complete their modifications during each volley, and then must pass the graphic file back to the other competitor and upload it to the web for spectators to view. A third designer provides live commentary on the match, and at the conclusion, viewers debate the merits of each designer’s respective volleys and vote on the winner.

Traditionally, participants are limited to using Photoshop or some other single, agreed upon graphic design software package, but Coudal’s version of the game allows designers to use pretty much whatever software they want. That means that very often what starts off as a static image evolves to include things like Flash animations after a few volleys.

Last year’s season featured some of the web’s top designers, including Shaun Inman, Veerle Pieters, and Jason Santa Maria, with commentary by people like John Gruber and Jason Kottke. Season two will begin on Friday the 13th of February (ominous, no?) and last for 12 weeks. In addition to the featured match each week, additional live qualifying matches will be held among “amateur” designers hoping to secure a spot in the season ending, single elimination championship tournament. Prior to the season, the official Layer Tennis site is promising “something special” on Friday, February 6th.

Only those spectators who register for free “season tickets” will be allowed to participate in the voting process. Coudal is also currently accepting nominations and applications for designers seeking to take part in the qualifying matches. They suggest playing a practice layer tennis match with a friend and sending them copies of the resulting volleys.

A great place to hold those practice matches would be SitePoint’s Graphic Wars forum, which has been home to Photoshop tennis matches since 2001. The number of matches has definitely fallen off in recent months, and now would be a great time to revive the classic SitePoint Graphic Wars tradition.

You can check out the archives of season one at the Layer Tennis site.

‘Tis the Season to be Flattr-ingCraig Buckler