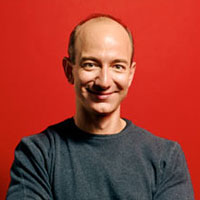 US News and World Report recently named Amazon founder Jeff Bezos one of America’s Best Leaders for 2008, in part due to his role as an Internet pioneer who established the bar for how online commerce is done. Part of the interview done with Bezos for the magazine was republished online and he gives some interesting startup advice.

According to Bezos, business success requires a long term plan. Part of enacting your long term plan, he says, means sticking to it and ignoring the naysayers. Pundits and critics might not understand what you’re doing, but if you believe in your plan for success, what they think shouldn’t matter.

Amazon has done that many times, he said, and come out the other side. “While we’re crossing the desert, we may be thirsty, but we sincerely believe there’s an oasis on the other side.”

Bezos also acknowledges the truth behind a popular adage: success requires failure. “If you want to increase your success rate, double your failure rate,” is a famous quote from Thomas Watson, the founder of IBM. Bezos echoes those sentiments, saying that experimentation requires failure, and success requires a willingness to fail. For a certain type of people, he says, the prospect of not succeeding is exciting. It’s what drives them.

We call those people entrepreneurs. Amazon tends to attract that type of person, according to the company’s founder.

That’s something we’ve talked about in the past on this blog as well. Communicating directly with your customers is also a great way to turn users into “true fans” who will evangelize your product or service. Don’t miss our four tips for how to speak directly to your customers and our list of 15 companies that really get corporate blogging, for some inspiration.

Utilizing Both Strategic and Tactical Planning for Long-Term SuccessJohn Tabita

Exclusive Webinar: Host Your Website in the Cloud with Jeff BarrMark Cipolla