What is Firefox OS?

Firefox OS is a new mobile operating system created 2 years ago. Largely experimental until now, but in the last year it has been commercialized with the support of companies like LG and ZTE, who are the main producers of devices implementing Firefox OS. Firefox OS is created by Mozilla, who’s main product, the Firefox web browser, is one of the most used browsers in the world. The Firefox browser is important in the history of the web, with a large community of supporters and app developers. For an overall guide and general introduction to Firefox OS, read Jeff Friesen’s article.

In this article we will create a packaged app. We won’t install the simulator mentioned in the article above, but another recommended by Mozilla.

Why create a Firefox OS app?

Applications for Firefox OS are developed using HTML5 and thus very simple to learn and develop, and gives an opportunity for everyone to develop a mobile app. Mozilla is a supporter of the Open Web, it has built an API that makes it easy to integrate apps with the device, and are working with the W3C to make this API a standard. You can gain valuable general knowledge by building a Firefox OS app.

What app are we creating? 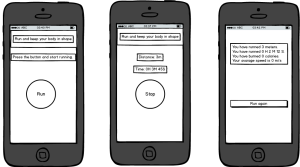 I decided to create a simplified version of an existing application on the Firefox Marketplace. It is a running application to find how much have you run in distance and time, how many calories you have burnt and your average speed.

The application only contains two pages. The first page allows the user to start a timer and gives real-time running data. The second page shows the results and asks the user if they want to run again.

We will use Building Blocks and it’s infrastructure and logic. Building Blocks makes Firefox OS applications look more beautiful and native. Before starting, it is a good idea to take a look at the framework, its components, how you can use them and how they are interconnected.

You will also need the JQuery and Jquery color animation plugins. 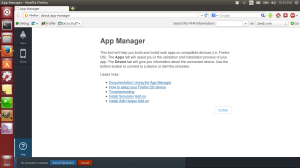 Install the Firefox OS simulator from Mozilla’s Firefox App Manager add-on page. Once installed, the simulator can be started in your Firefox browser from the Tools>Web Developer>App Manager menu and by clicking the blue button Start Simulator at the bottom of the window.

If you have a device available for testing, also download ADB Helper and the proper drivers. You can find a guide about installing drivers in Windows here

Unzip your Building Blocks download and open the manifest.webapp file. It’s easier if we just modify it. This is the manifest that contains information about the application. We will name the application “Runner-simplified, type this into the ‘name’ field.

You can put any description you want and leave launch_path as is, this is the file we will use for the application. Don’t change the icon links, if you want to add more icons, just change the existing ones. We also add the version of the application and the developer’s name and url.

We also need to add some more information into the manifest such as screen orientation and permissions relating to using the geolocation system. Since we find the location of the device every 10 seconds in order to find the distance run, it’s important we add this permission. After making these modifications we have the following manifest file

What will we use from Building Blocks?

This app will only use two components of Building Blocks, a header and a blue button. Start by creating a backup file, a copy of app.html (which I’m calling onePageApp.html). This makes it simpler to return to an earlier stage of development. We also modify the manifest file by setting this new file (onepageApp.html) as the launch path.

Delete everything from the body except the first section with id=“index”. This section has another sub-section with the data-type of “sidebar” (Building Blocks has many different data-types that give a graphic meaning to the element identified). Since we don’t need it, delete it too. The second element is another sub-section which holds the header. We need it so don’t delete it. The header contains 2 links that were used by sidebar, delete those links.

The last modification we need is the element “article”. This will hold the code of the page. You can see in the mockup that there we need text and a button that will activate the GPS and keep it running until the button is clicked. We also delete the div with data-type of “list” inside the article, since we will not need it. We now have a blank page.

This is the look of the body after those changes:

Modify the header by putting the title from the mockup.

Let’s add a little CSS to make it more attractive. In the main directory add a file named style.css and include it.

Add these lines of CSS:

Now let’s make the second page, which can be a modification of the first. Hide the h2 title. We will change the button’s text from “Run” to “Stop” and print text that shows the distance and time run by the user. This text will be updated every seconds. We’ll do this with jQuery. We include the jquery.js and other JavaScript libraries and also the jQuery plugin for the color animation.

Now that we have a functioning sample, we can test it in the simulator. Go to the app-manager and click Start Simulator and select Firefox OS 1.3 (there might be other versions of the simulator). Using the simulator you can see how the app looks on a device.

Click add packaged app, navigate to your manifest file and click update. This is the installation of the application into the simulator, or an update, if the app was installed before. Beside the update button, there is the console button, which helps us debug.

Let’s add some JavaScript to hide the title and change the text and button’s border color. We put this at the end of the document.

Here we create an event handler for the run button. If the text in the button is “Run” it is changed to “Stop” (and vice versa) and the border changes its color by using the jQuery plugin jquery.animate-colors-min.js. The functions slideUp() and slideDown() are two functions that make an element visible or hidden with a simple animation.

Until now, we had a button that changes the text and its border color, an h2 title and real-time data which become hidden and visible by clicking the button. We now add the code to find the coordinates and the run distance. Delete all the code in app.js and add this:

Inside the event handler of the function we create an interval which get executed every 10 seconds and after we click “Stop” this interval is broken and the variables reset. This is achieved by calling clearInterval() with distanceInterval as an argument.

We also add another interval that updates the run data, “timeInterval” which holds this value.

We add another variable called “startTime” which holds the time at the beginning of the run. We create an interval to update the time by calling the function timeLeft().

The only thing left is the page where a user sees the run results. We create a new section, with no header. Let’s copy a section from app.html of Building Blocks and edit it. We put an id and its data-position as “right”. Using these data-positions, we can make transitions from one page to another. We leave only the article element, since we don’t need any other.

Test it again in the simulator. Just click update to the app-manager and see the result.

This is a simple event handler for the “Run Again” button which reverses what we did to get from index to viewResultsPage.

The last thing is to print the run data into the viewResultsPage and reset every variable for a new run.

Creating a Firefox OS application is not hard, it is easy for anyone who has experience in web development. Using Building Blocks makes it even simpler. Firefox OS is a new mobile OS and is making moves that no other OS has made before. I believe that the Open Web will bring a new epoch in the web and Firefox OS and Mozilla are making fantastic efforts.

What do you think about Firefox OS?