How to Install MySQL: Instructions for Local, Cloud, & Docker

Almost all web applications require server-based data storage, and MySQL continues to be the most-used database solution. This article shows you how to install MySQL on your local system during development.

MySQL is a free, open-source relational database. MariaDB is a fork of the database created in 2010 following concerns about the Oracle acquisition of MySQL. (It’s is functionally identical, so most of the concepts described in this article also apply to MariaDB.)

While NoSQL databases have surged in recent years, relational data is generally more practical for the majority of applications. That said, MySQL also supports NoSQL-like data structures such as JSON fields so you can enjoy the benefits of both worlds.

The following sections examine three primary ways to use MySQL in your local development environment:

This popular article was updated in 2020 to provide users with the most up-to-date instructions to install MySQL. For more on MySQL, read Jump Start MySQL.

Installing MySQL on your local development machine may be practical if you want to use a single instance across multiple projects or require the service to run on boot.

There are some excellent all-in-one macOS, Linux, and Windows distributions that contain Apache, PHP, MySQL, phpAdmin, SSL certificates, frameworks, and other applications in a single installation package. Options include:

Most are ideal for quick PHP and MySQL development set-ups and may offer multiple editions of each service. However:

All-in-one packages are best for projects with a single programmer or those who are new to web development.

There are numerous ways to install MySQL on a variety of Linux distros:

To install MySQL on macOS 10.13 and above, download the native package installer .dmg disk image. Double-click to mount the image then double-click the .pkg file to start the installation wizard.

If you choose not to start MySQL automatically, it can be started from the icon in the System Preferences pane: 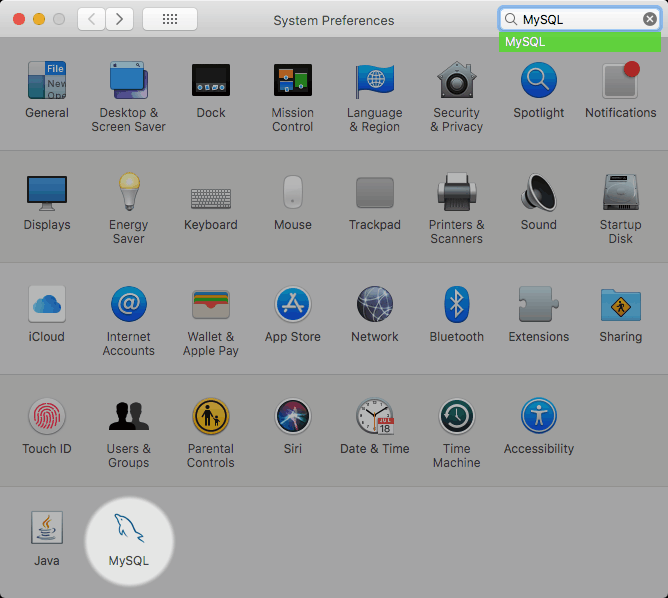 It is also possible to install MySQL on macOS using:

To install MySQL on 64-bit editions of Windows 10 and Windows 2012 Server R2 and above, you will need the following runtimes:

The MSI installer provides the server as well as tools such as MySQL Workbench. (The smaller “web” MSI installer will download packages when selected.)

Double-click the MSI file to launch the installation wizard and refer to the MySQL documentation for specific configuration options.

A no-install ZIP archive is also available. This can be copied to a USB drive or anywhere on a Windows system.

First, extract the contents of the ZIP to C:\mysql or a folder of your choice.

Then create a folder where database data will be stored, such as C:\mysqldata. Using a folder outside of C:\mysql is safer and allows you to upgrade application files.

Now create a my.ini file in C:\mysql which specifies the application and data folders. for example:

(Forward path / slashes are required, although double \\ backslashes can also be used.)

Now initialize the data folder and create a default root user (without a password) by entering the following command at the console prompt:

The server can now be started with:

Use the MySQL client by entering C:\mysql\bin\mysql.exe -u root in another console. You can now issue SQL commands such as show databases; and quit by typing exit.

The server can be shut down with:

Optionally, MySQL can be installed as an auto-starting Windows service:

The service will launch on reboot or you can enter net start mysql to start it immediately. It can be stopped using net stop mysql or managed using the Services panel in Windows Administrative Tools: 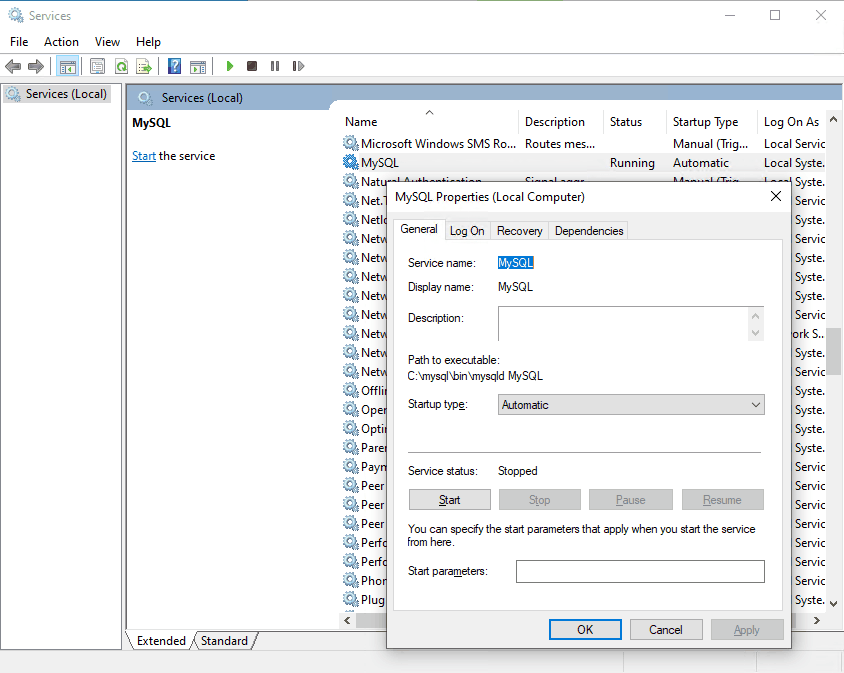 The service can be fully removed using:

MySQL services are offered by AWS, Azure, Google Cloud, Oracle, and many other specialist hosting services. Even low-cost shared hosts offer MySQL with remote HTTPS or tunneled SSH connections. You can therefore use a MySQL database remotely in local development. The benefits:

A cloud-based option may be practical for those with minimal database requirements or large teams working on the same complex datasets.

Docker is a platform which allows you to build, share, and run applications in containers. Think of a container as an isolated virtual machine with its own operating system, libraries, and the application files. (In reality, containers are lightweight processes which share resources on the host.)

A Docker image is a snapshot of a file system which can be run as a container. The Docker Hub provides a wide range of images for popular applications, and databases including MySQL and MariaDB. The benefits:

Docker is beyond the scope of this article, but key points to note:

Instructions for installing the latest version of Docker on Linux are available on Docker Docs. You can also use official repositories, although these are likely to have older editions. For example, on Ubuntu:

Installation will vary on other editions of Linux, so search the Web for appropriate instructions.

Docker on Windows 10 uses the Hyper-V virtualization platform, which you can enable from the Turn Windows features on or off panel accessed from Programs and Features in the the Control Panel. Docker can also use the Windows Subsystem for Linux 2 (WSL2 — currently in beta).

To ensure Docker can access the Windows file system, choose Settings from the Docker tray icon menu, navigate to the Shared Drives pane, and check which drives the server is permitted to use. 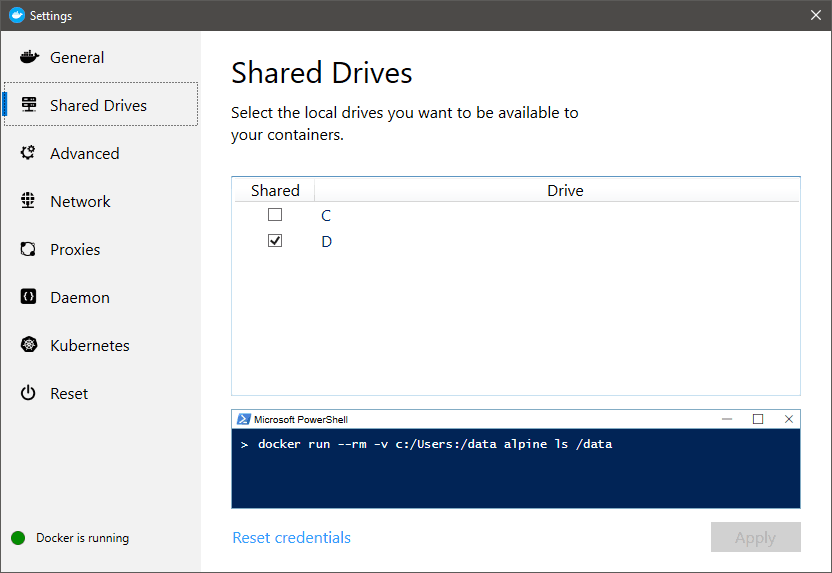 To make it easier for Docker containers to communicate, create a bridged network named dbnet or whatever name you prefer (this step can be skipped if you just want to access MySQL from the host device):

Now create a data folder on your system where MySQL tables will be stored — such as mkdir data.

The most recent MySQL 8 server can now be launched with:

$PWD is the current folder, but this only works on macOS and Linux. Windows users must specify the whole path using forward slash notation — such as /c/mysql/data.

The first time you run this command, MySQL will take several minutes to start as the Docker image is downloaded and the MySQL container is configured. Subsequent restarts will be instantaneous, presuming you don’t delete or change the original image. You can check progress at any time using:

Once started, open a bash shell on the MySQL container using:

Then connect to the MySQL server as the root user:

-p is followed by the password set in Docker’s -e argument shown above. Don’t add a space!

Any MySQL commands can now be used — such as show databases;, create database new; and so on.

Use a MySQL client

Any MySQL client application can connect to the server on port 3306 of the host machine.

If you don’t have a MySQL client installed, Adminer is a lightweight PHP database management tool which can also be run as a Docker container!

Once started, open http://localhost:8080 in your browser and enter mysql as the server name, root as the username, and mysecret as the password: 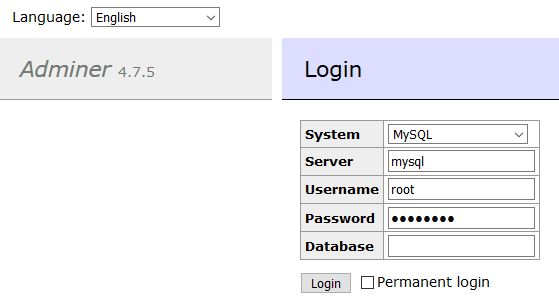 Databases, users, tables, and associated settings can now be added, edited, or removed.

Containers can be stopped (and automatically removed) with the docker stop command followed by one or more container names. For example:

Docker images and containers are lightweight when compared to virtual machines, but you can wipe all data using:

docker-compose can manage any number of containers without you having to enter long Docker commands. Create a docker-compose.yml file in your current folder:

Both MySQL and Adminer containers are launched with the same configurations as used above. Press Ctrl + C to stop and remove the containers.

There are multiple MySQL installation options no matter what OS you use.

For those learning about MySQL, a cloud provider or all-in-one package is likely to be the easiest way to start. As your application starts to grow, consider adopting Docker in your development workflow or managing a local MySQL installation. Docker becomes increasingly practical as multiple developers join the project. Eventually, you could return to cloud-based options as your successful product evolves.