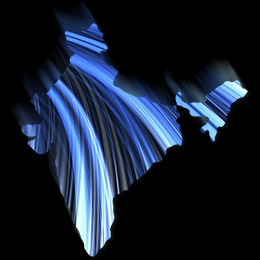 India has an ambitious plan. The Government intends to roll out broadband internet access to all 630,000 towns and villages, no matter how remote they may be. They hope it will improve education and health services across the country.

The schedule is incredibly tight. They believe that every village with a population of more than 300 people can be connected by May 2012. You should note that only 7.2 million people in the country currently have broadband access and only 14% of people outside major cities have a mobile phone.

However, a successful trial of WiMAX in Guwahati has exceeded expectations. Government officials think the technology could be ideal for remote regions since it permits internet access within a 10-mile radius of a central mast. The north-eastern state of Assam will also be the first to receive high-speed fibre-optic cables.

If the plan works, it will spark a massive increase in the number of active internet users. An estimated 1.8 billion people currently use the internet whereas India has a population of 1.2 billion.

I also hope that the Indian Government has considered that the free IPv4 address pool has dropped below 10%. It looks as though IPv6-day may be required sooner rather than later.

Let’s hope their plan is successful. However, speeds are not likely to be particularly fast on day 1. It’s another good reason to keep your page weight down.

Can India implement their internet plan within 2 years?