As far as weeks go, this one didn’t start off particularly well. I was enjoying a rare Sunday treat – a day without my kids – when I made the fatal mistake of logging into work to make sure that nothing disastrous had happened. So I guess you could say that it served me right to find that it had.

When your job is to manage an online community, there are a few things that you pray will never happen. Lightning striking the server is one of them – but that would have been preferable to Sunday’s monster spam attack. Apparently several hundred people with strange names all had the same product to sell at exactly the same time and they chose our forum at which to do it. They have been appropriately dealt with now and I apologise for any inconvenience that they caused. 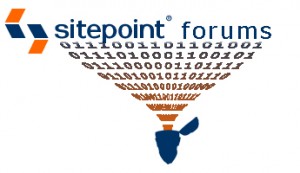 The rest of the week settled down into a much more ordinary one and I am spending the last two days of it over in Melbourne at SitePoint HQ. I have some pretty exciting ideas for community projects so I’m here to run them by the rest of the team.

One thing that I am particularly excited about at the moment is the recent formation of our General Chat Task Force. This group of vibrant characters have been charged with breathing a bit of life back into the ‘blow off steam’ part of the SitePoint forums. They’re already making their presence felt with a few interesting threads like How Googleable are you? and What’s the weirdest thing you’ve ever seen on YouTube? So if you need a break from geeking out, drop by General Chat and see what else they’ve come up with.

Hot Topics This Week
Shayne Tilley shares some interesting insight in the Promotion Techniques forum. Have a read of Understanding the Why, Not the What.

In General Chat we’re discussing the ins and outs of Ergonomics. Is it something that you think about?

There is a very interesting conversation going on in Business and Legal Issues, where dvduval asks what you would do with a smart guy that only charges $3 per hour?

And I’ve been saving the best for last. If you’re a SitePoint book owner you’ll want to check out News and Announcements. We have released most of our titles in Mobi and ePub formats and provided you already own a title in PDF format, you can download the new formats for free.

Spam and the LawBrandon Eley

The Community Book and Other Interesting TopicsSarah Hawk