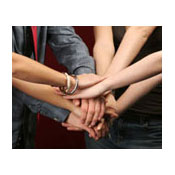 Beside being a rather forgettable Kevin Spacey film, “pay it forward” is a concept that could potentially help a lot of people if really put into action. The idea is that we’re all good at something, we’re all capable of helping others, and we all need help at one point or another. If you’re the beneficiary of a good deed, pay it forward by helping someone else in need when you can. As a character in the movie says, it forms a sort of “Mother Theresa conga line” of people helping other people.

According to Wikipedia, the idea was first introduced in 1784 by Benjamin Franklin. “I do not pretend to give such a Sum; I only lend it to you,” he wrote in a letter to Benjamin Webb, to whom he’d loaned money. “When you […] meet with another honest Man in similar Distress, you must pay me by lending this Sum to him; enjoining him to discharge the Debt by a like operation, when he shall be able, and shall meet with another opportunity. I hope it may thus go thro’ many hands, before it meets with a Knave that will stop its Progress. This is a trick of mine for doing a deal of good with a little money.”

That concept of progressive reciprocity recently struck long-time SitePoint Forums member Dave Dalton, and drove him to create a marketplace for pay it forward scenarios called HelpingKind.org. He soft launched the new web site this week.

“It all started with a friend that had some medical problems and couldn’t take care of a few things around the house,” says Dalton. Rather than hiring someone to fix some problems the friend was having around his house, a few other friends got together on a Sunday afternoon and lent a helping hand. Dalton says the experience brought his group of friends closer together and it felt good to help relieve a little stress from a family in need.

“After [that day] I could only think about the ‘old days’,” he says, “the days when an entire community would come together when one member of that community was in need. Your barn burned down? Within days the entire town was there to help you build another one. Why? Because everyone in that community knew it could very well have been their barn!”

The idea of “people helping people” is an old one, says Dalton, but one that he thinks still has plenty of relevance today. So he spent the better part of the past month building HelpingKind.org as a marketplace for good samaritans. Users can post needs when they’re in need of help, and are encouraged to promise to repay that good deed with future good deeds (or barter with helpers using donations of in-kind helpfulness), if they can. Others can surf the marketplace for people in need of some help.

“If we can all reach out to everyone we know whether they are in need or can help we can build this site into a massive network of people helping each other, a network of communities realizing an ‘old school’ principle that still works today,” Dalton told me. “Taking an hour or two out of our daily rituals to assist someone else not only helps that person it binds a community together. It brings people together in a special way that enhances every ones life. It rekindles the idea that people, no matter how rich or poor, no matter how complicated their lives, are each others neighbors and together make a strong community.”

The idea may seem over idealistic, and maybe it is. But we applaud Dalton’s effort and wish him luck. He faces a chicken-and-egg problem at the outset in terms of content. It is hard to foster participation without content, and hard to get content without users participating, so for now, the site feels a bit empty.