A Crash Course in Growth Hacking with Google+

I ran into a very useful video for mobile-aware developers on the Google Developers YouTube channel not so long ago that discussed some new growth hacks you can do for your business, your web app and your mobile app with Google and Google+. This video is a cheat sheet on what you can do to ensure huge growth in 2014 for both your websites and mobile apps.

At 43 minutes, however, it’s a bit long, and not many people enjoy a medium over which they have little to no control over the speed of consumption. Since many of you read very fast, here is a 15-minute recap with added details on how to accomplish all that was mentioned.

If you’d like to watch the full video, please see the end of the article. Otherwise, continue reading. Every sub-section will be marked with (mobile) or (desktop) to indicate the platform to which it applies.

When searching on Google, if you search for a specific property and that property has a verified Google+ page, the latest content published by that property’s Google+ page will appear to the right of the search results. For example, if I punch in DC Shoes, the frame of their G+ page shows up with their latest content and an information snippet. If I Google “Sitepoint php”, look what happens: 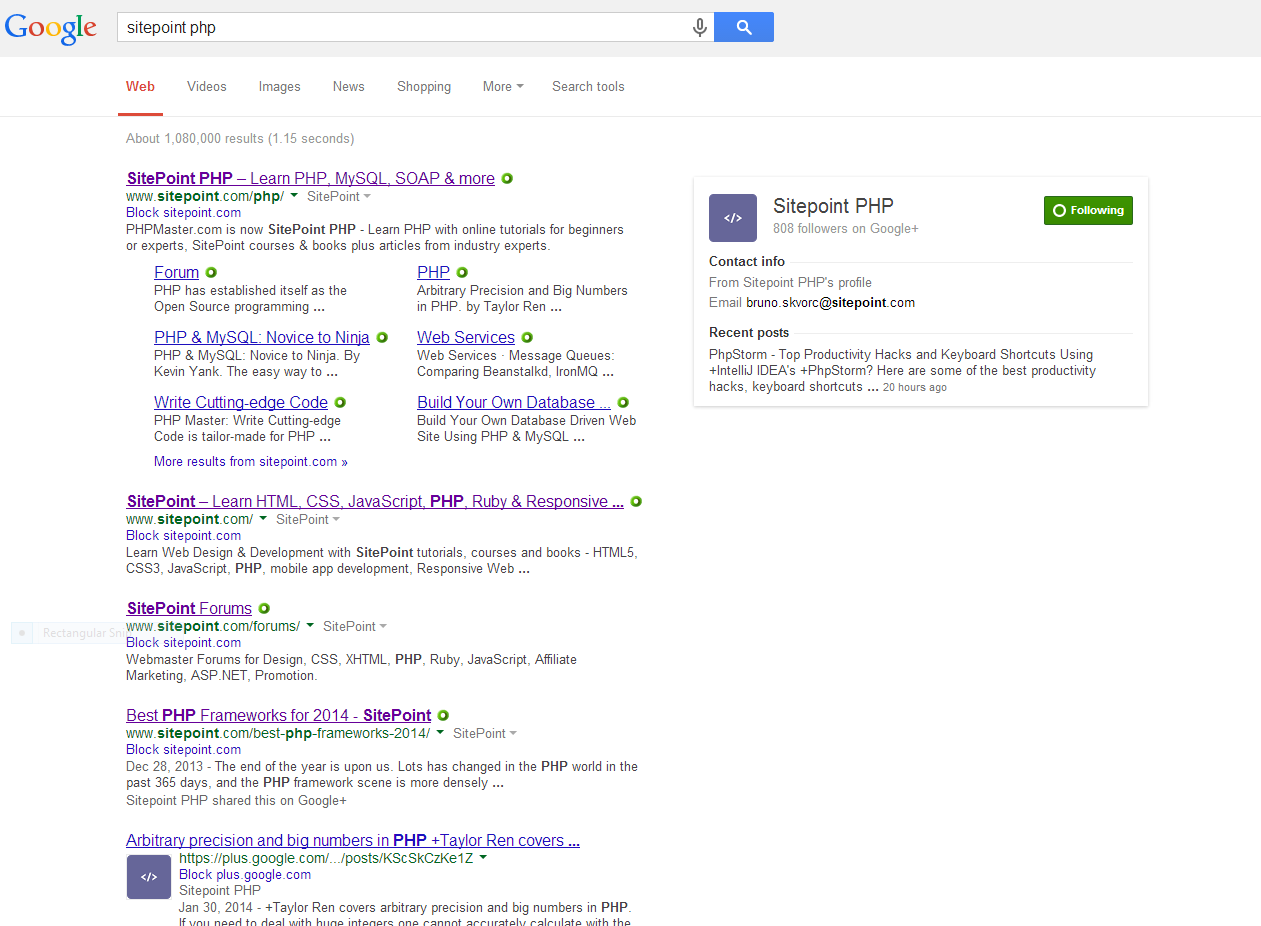 This is automatic. All you need to do is verify your page (instructions for doing that are on your page’s dashboard in Google+) and Google takes care of the rest.

App Indexing is when you let Google index your mobile app in such a way that search results on your website, when the search is performed on the mobile Google Search app, offer to be opened in the app itself, if the app is installed.

For example, if I search for Natalie Portman in Google on my Nexus 7, and I have IMDB installed, the Natalie Portman result will offer to “Open In App”. See exactly what it looks like at 9:20 in the video.

Likewise, any search hitting some of your app’s keywords can now show your app in the search results as an installable direct-to-PlayStore link. It’s as if Google Search on mobile now also searches the Play Store if the query can match apps specific enough.

While App Indexing is not fully open nor available everywhere yet, it is coming. It suggests apps based on user’s interests, behavior and other installed apps and you can find out more about it here.

Also note the importance of deep-linking your resources. Deep-linking will allow your users to open any mobile resource inside your app, just as described above, whenever a hyperlink is clicked. It also allows for advanced sharing intents. To learn more about deep-linking and how to set it up, see here.

When signing into a property online for the first time through Google+ Sign-in, the property can assume the visitor is a “fan” of it, and automatically offer its Android app to the user if:

This is shown in the form of a popup window as seen below: 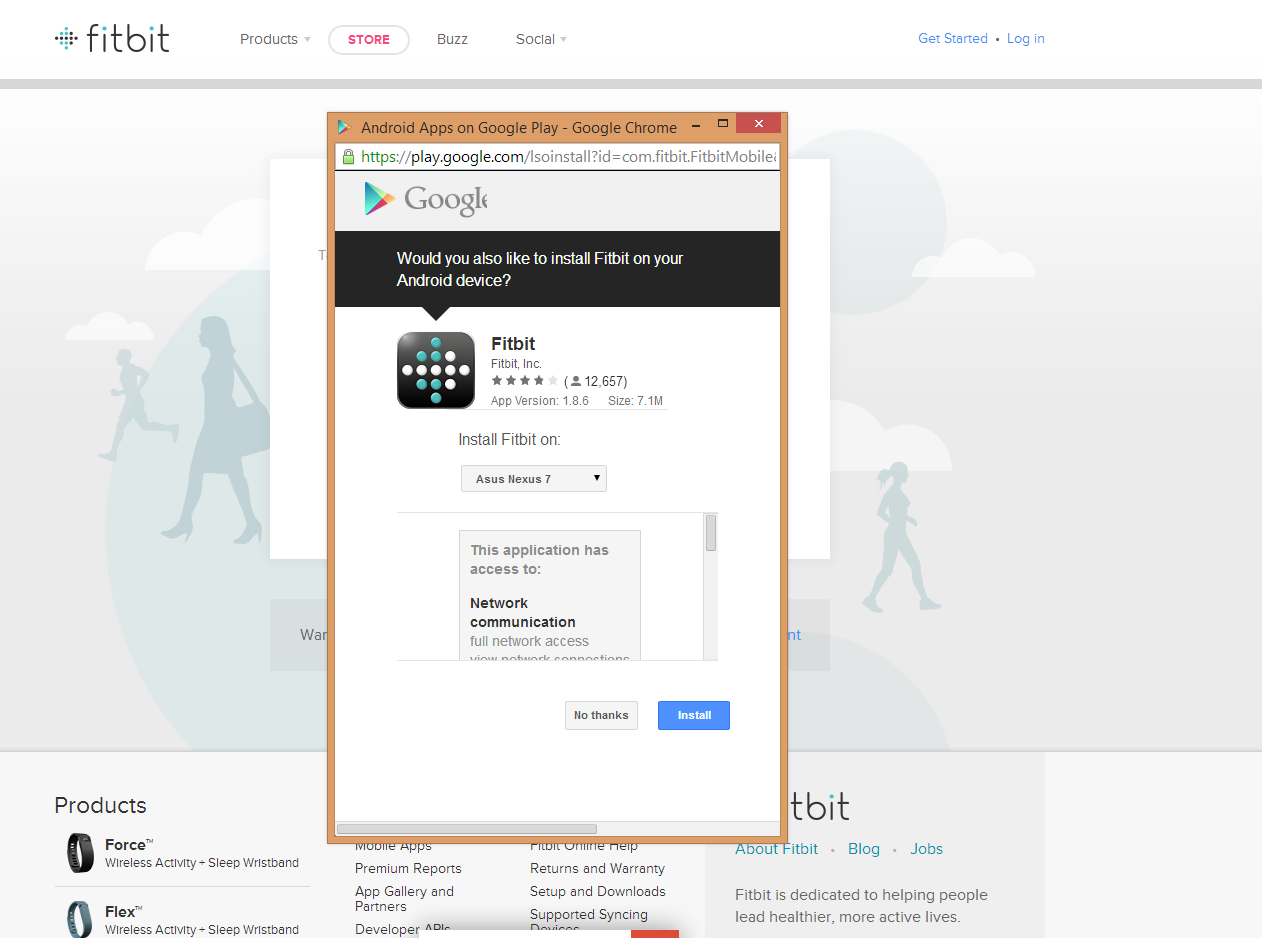 This pop-up is only shown once and only on first sign-in, so the user won’t be repeatedly pestered. It also won’t automatically install the app – the user must confirm it. Still, it’s an excellent way of letting your users know you have a dedicated Android app for your web property, and an even better way to drive app installs, because the user never has to leave your site to do it from the Play Store.

When asked, companies that use this reported up to a 40% increase in install numbers since implementation (in Fitbit’s case). The lowest reported increase was 25%. Imagine getting 25% more app users just for implementing this suggestion into your sign-in flow!

For now, only a single app can be linked up to this process, so no multi-app installs (for now), and only free apps are supported. To find out how to do this, read here.

Google+ sign-in is a no-brainer on mobile devices – if you have an Android device, you probably have a Google account on it, and you’re probably logged in already. On iOS, it’s almost as simple. There’s nothing smoother than just tapping a single button on a mobile app and being signed in as if having an account on a web site or app.

Google+ sign-in alleviates cross device fragmentation, and when a user signs in with G+ on one device, he is automatically signed in to the app/site on all his devices. This can be awkward if your other devices are in the hands of someone else, but signing out is only a tap away. What benefits does this bring?

Aside from a shared session across devices, the initial Google+ sign in of a user will allow you, as a developer, to request permission to certain user APIs, some of which can be crazy growth drivers. Some examples:

These are just a few examples. To learn more on both how to implement the Google+ Single Sign-In, and what you can do with it, read here.

When the user is sharing to Google+ on mobile, you can usually get all their friends and contacts through either G+ (circles) or the Contacts API on Android. If you’re picking them from G+, you also have a “Top 10 by affinity” filter available in the API which lets you select the contacts with whom the user has had the most contact. These (up to) 10 users can then be pre-populated in the “To” field of the G+ share box.

This increases the speed of sharing with the user’s most frequent contacts, helping the share operation and assisting the spread of your content.

Interactive sharing with call-to-action buttons is one of the most powerful features of Google+ posts. These buttons are specifically pointed out in posts like so: 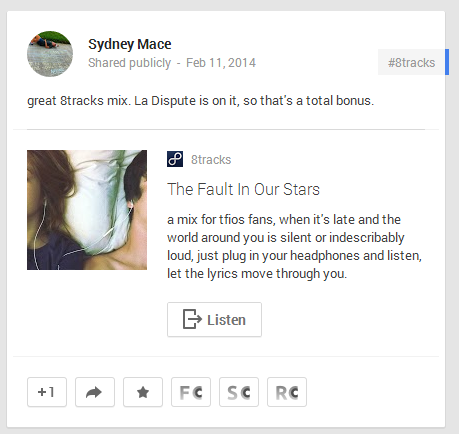 These buttons have a click rate 3x higher than regular links shared through Google+, which is an enormous gain.

What’s more, if I’m listening to music in 8tracks on my mobile device and decide to share it with my friends, when clicking the Listen button, each has the appropriate action performed by their device. Those who don’t have the app installed are prompted to install it directly in the App/Play Store and are immediately taken to the song after the installation – a very smooth experience. Those who have the app installed are taken directly to the song in the app, and those on desktops will be taken to the website to the songs I shared. It’s a streamlined context-aware experience for both the sharer and recipients.

You can add actions to messages in Gmail, and these get rendered as buttons in the subject line of the message. On mobile, they get integrated with Google Now, and the user is called to action on them. There’s a limited number of supported actions, but some of them are: Confirm, Save, RSVP, Review, and others.

Example: a user signs up to your website. Typically, on the next screen they’re told to look at their inbox and confirm their email. In their inbox, they see an email with a link – clicking this link opens another tab with your site, saying “Email confirmed”. Wouldn’t it be better if this second tab never opened?

With the Confirm action, the user simply clicks the Confirm button in the subject line, and the process is done for them behind the scenes. They can go back to the original tab of your app and continue using it. Of course, not everyone uses Gmail, so it’s best to still include a regular link in the body or send the action-version of the email only to @gmail addresses, but it’s good UX to take advantage of this feature.

If you’d like to look through the entire video, here it is:

People fear spam. They refuse to enter apps that require Facebook and Twitter for fear of those apps spamming either them or their contacts. What’s more, fewer and fewer apps offer a pure old-school user/pass registration and rely on these social networks, actively dragging and keeping their userbase down.

With Google+, there is no fear of spam, as Seth says at 38:30 in the video. In fact, ever since apps introduced Google+ sign-in, they saw a rise in unique users. Why? Because most people don’t like Facebook and Twitter as logins any more, and most are again too lazy to input user names and passwords on mobile devices – it’s just too easy to single-tap and be logged in with Google. If you don’t like the app, you simply withdraw its permission from your apps list, and it’s like nothing ever happened.

Google’s new services and Google+ in particular are phenomenal growth cultivators, especially for mobile. Don’t miss out on this new era of growth because you’re skeptical of the bleeding edge — hop on and see, it’s not as sharp as you think.