It may only have been in beta for a few weeks, but Chrome 5 was released this week. It’s also the first version to be available simultaneously on Windows, Mac OS and Linux.Google is eager to demonstrate the speed improvements. For example, since version 1.0, there’s been a 305% improvement in JavaScript speed according to the SunSpider benchmark: 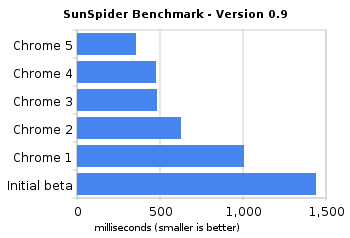 and a 213% improvement according to the V8 benchmark: 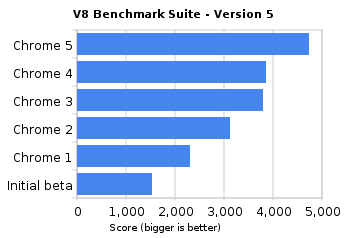 These figures rarely mean anything to most people, so Google has produced a video which demonstrates the browser’s speed in comparison with a potato gun, the speed of sound and lightning. Yes, seriously:

(Don’t you wish your company had this much time and money to waste?!)As well as speed, Google has addressed various bugs and 6 vulnerabilities (two were rated as a high-risk). It’s also possible to use extensions in incognito mode.The features mentioned in my post about the beta have made it into the final build with the exception of the integrated Flash Player. Google Product Manager Brian Rakowski has stated that it will be included when Adobe release the final version of Flash Player 10.1.Chrome 5 can be download for Windows, Mac OS and Linux at google.com/chrome. Existing users can update by clicking the Tools icon, choosing About Google Chrome and clicking the Update button.An automated update will occur shortly, but what if you don’t want to update just yet? Coming soon on SitePoint.com … How to Disable Google Chrome Updates.Do you have Google Chrome 5 installed? Is it better? Is it faster? Has it become your default browser?