We have less than one month until Google Reader closes its doors forever. Despite the pleas and protests, Google is unlikely to have a change of heart. The world’s most-used and successful RSS reader will cease to be on July 1, 2013.

While there are alternatives such as Feedly, many depend on Google Reader for managing feeds. There are no painless migration guarantees. Whatever options you’re considering, it’s essential to back-up the feed URLs and starred items you’ve collected during the past eight years. You won’t find much help in Reader itself, but the process isn’t difficult…

You probably won’t need or want to download all your data (unless you’re completely abandoning Google), so hit the Choose Services tab followed by the Reader icon: 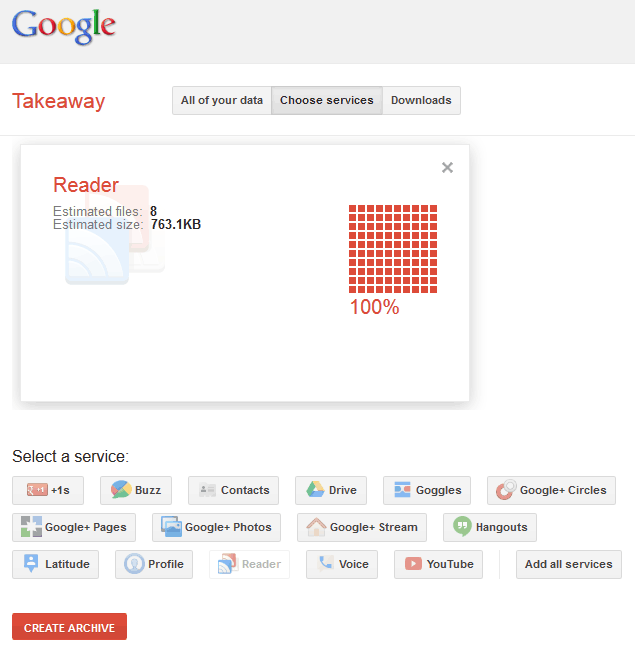 Takeout will calculate the approximate size of your archive.

Hit the CREATE ARCHIVE button. The process should take no more than a few seconds but, if you have a considerable quantity of data, you can ask to be emailed once it’s complete.

You can return to the Downloads tab at any time should you wish to download again.

The archive contains a Reader folder with eight files:

The big question is: what are the options for ex-Google Readers?

Google Reader’s demise leaves a large RSS-shaped hole on the web. Google killed many competitors and there are few alternatives which offer a great web and mobile experience backed by a reliable network infrastructure.

Personally, I’m going to continue with Google Reader until the absolute end in the deluded hope they’ll reprieve the service. However, there are a number of options I’m investigating — stay tuned for 12 Free Google Reader Alternatives on SitePoint soon.