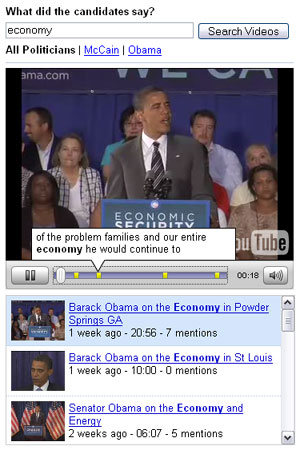 Late yesterday afternoon Google announced a new gadget for its iGoogle start page that offers full-text political video search. The gadget takes videos from YouTube’s Politicians channel and runs them through a speech-to-text processor. It then automatically creates text transcriptions and indexes them, matching the text to where it appears in the video.

Each found reference of your search string is marked using a yellow pip on the video time line, allowing you to jump directly to the correct part of the video.

Google warned that some of the transcripts won’t be 100% accurate because they’re produced by a machine, and we did notice that a few of the snippets it found weren’t perfect. That said, they were good enough to be useful in searching and scanning political speeches. That’s especially impressive given that according to Google automatic speech-to-text transcription happens within a couple of hours of a new video being uploaded to the YouTube Politicians channel.

For now, the speech-to-text technology is only being used for political videos on the iGoogle gadget, but Google hinted at the technology some day being rolled out for broader use. “In addition to providing voters with election information, we also hope to find out more about how people use speech technology to search and consume videos, and to learn what works and what doesn’t, to help us improve our products,” said Google project managers Arnaud Sahuguet and Ari Bezman.

Google said that it is “constantly working to refine [its] algorithms and improve the accuracy and relevance of these transcribed results.” We hope that some day soon we see full text search implemented for all videos on YouTube and elsewhere. This technology could also feasibly be used to put contextually targeted overlay ads on videos.