Forum PHP is an annual PHP conference in Paris, France. This year, I was invited as a speaker and talked about work automation with some interesting tools and libraries.

The conference is organized by AFUP, the French Association of PHP Users – a.k.a. the French PHP user group. Under the overwhelmingly capable leadership of Fabrice Bernhard, Maxime Teneur and Thierry Marianne and the ever watching eye of Amelie, a wonderwoman who corresponded with everyone and made sure all arrangements were in order, the conference took place in its entirety at Le Beffroi, home of the biggest elePHPant you’ve ever seen. 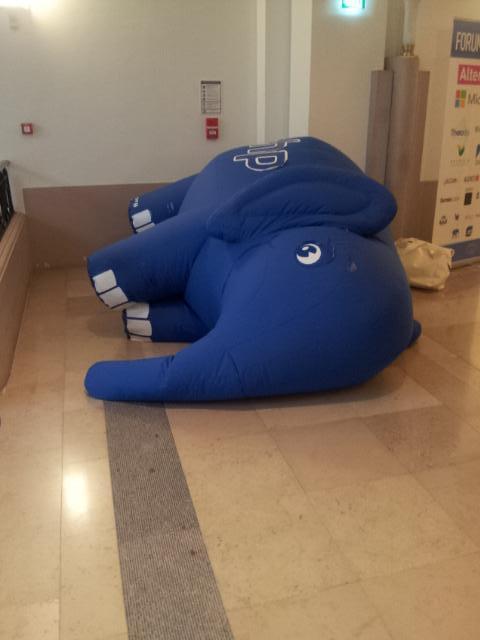 All speakers were made feel welcome, and save for some WiFi troubles that plague conferences as usual (except in the case of PHP Summer Camp), everything was in perfect order – snacks and organized mingling and networking notwithstanding. 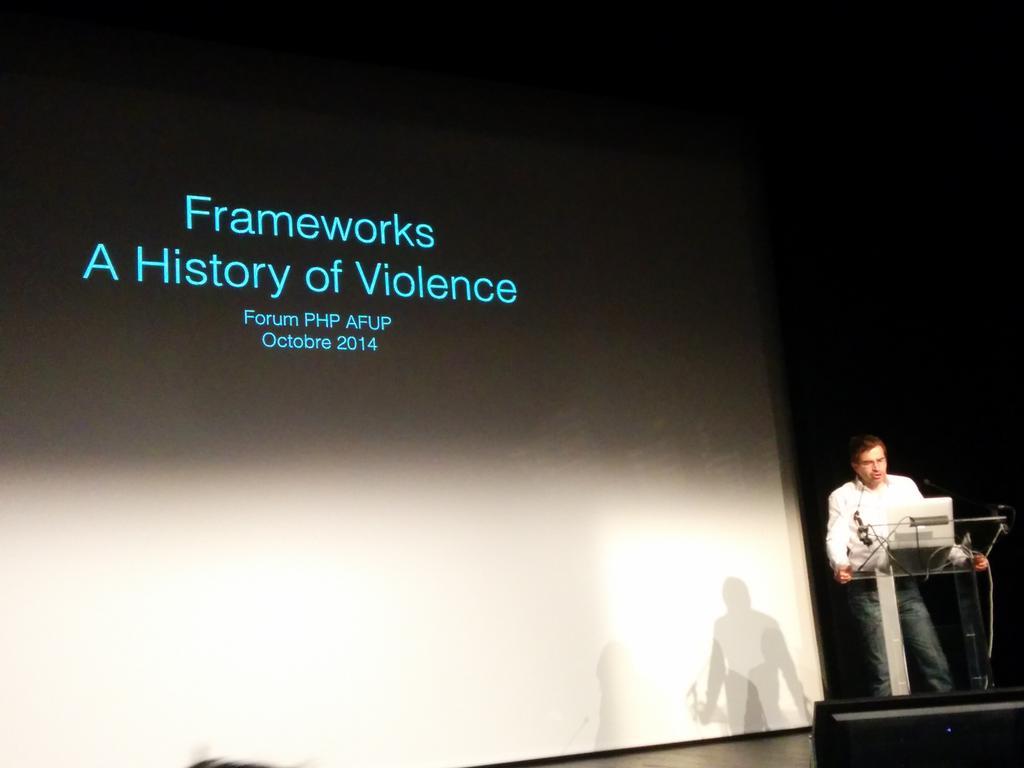 Most of the talks sounded interesting, though I was unable to attend them due to language constraints.

Sebastian Bergmann’s talk about DDD felt a bit too generic and spread itself too thin. I’m partially inclined to agree with this Reddit commenter who calls it too weak for a man of such caliber – we’re used to expecting more from our, well, heroes. Still, the talk was informative when it wanted to be that and I did learn new things – if not about the pattern, then about the man and the process behind PHPUnit.

Jordi Bogianno’s talk was a shovel to the face – I went in expecting an English presentation from the lead dev of Composer – a PHP hero if there ever was one. Sadly, the talk turned out to be in French, despite the English description on the session list. I followed along as much as I could with the slides and got the general gist of it, but judging by the CPM (chuckles per minute), the talk was entertaining enough to make me sorry for not understanding it.

The last talk I managed to attend was Beau Siemensen’s, and it was a breath of fresh air. A USA speaker and main developer of Sculpin, Beau talked about the hurdles he had to overcome in the process of building it – not only development-wise (embedded Composer? Madness!) but also dealing with the pushback from the community. 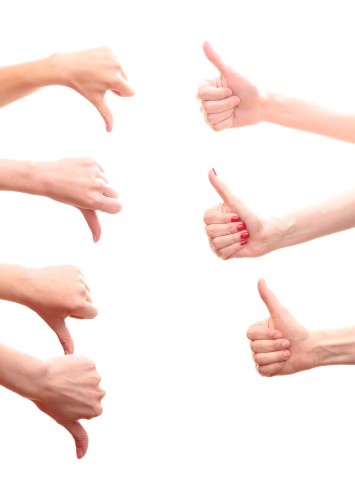 He was forced to re-evaluate his reasons for building Sculpin several times – told not to promote a product because alternatives exist, told he shouldn’t reinvent the wheel, he was borderline bullied by the community. And in programming, an area where the success of your work depends only on your own determination and enthusiasm for the area you’re working in, an unsupportive word from even a borderline prominent member of the community can really rock your boat and make you re-evaluate everything you’ve been working on so far. Cold words can ruin projects, and telling someone to “grow a pair” doesn’t help. It’s like having built a beautiful ice sculpture in Ontario after three weeks of arduous labor, and someone from Minnesota comes up, tells you they know of a bigger sculpture someone was making for two years there, and smash yours with a sledgehammer. The community is both an encouraging and poisonous environment in coding, and if you think you’ve found yourself in the latter, the message of talk was – don’t falter. Keep looking for the encouraging part, talk to even more people, expand your community further. Eventually, you’ll meet people who’ll support your idea objectively, without pre-existence bias.

It was a shame to see that most talks were in French. Granted, I went as a speaker, not as a visitor, but I still would have loved to understand some of them. At the very least, the official website should have noted the language of the talks in the programme list, so that English-only speakers know what to skip, and what to chase after. A common argument I’ve heard in favor of an all-French conference was several attendees not being able to speak English, but I refuse to believe that. Programming is talking to the computer in English, unless you’re working in a non-English based language (which you aren’t, because you’re at a PHP conference) so you’re either lying and refusing deflate your ego by admitting you speak English, or you’re a horrible programmer because you learn to code by heart, not by reason and logic.

I sincerely hope this aspect of Forum PHP will change in the future. I know the French aren’t too fond of the English language in general, but I do believe there is nothing to be lost and everything to be gained by opening the conference up to international attendees a little more.

The French PHP community is vibrant and enthusiastic. During informal gatherings, I didn’t get a sense of Anglophobia or isolation, and that’s all that matters in proper networking. If you can approach a group that’s speaking an entirely different language and have them accept you and adapt, that’s a sign of a healthy environment. While this attitude wasn’t as pervasive as it could have been, finding such groups and parachuting into them wasn’t that difficult. Curiously, some particularly fruitful chats happened with delegations of devs from sponsors of the event – in particular the Jolicode and BlaBlaCar crew – less in terms of mutual pitches and more in terms of just discussing everything and anything.

It was also interesting to hear how fond people have grown of SitePoint’s PHP channel in the past year or so – I was told on several occasions that it now occupies a permanent spot in people’s everyday feed readers, serving both as a source of light reading for commutes and short breaks during work, and in depth reads about tutorials and such when there’s time for such an undertaking – and that was the goal all along.

My impressions of the community are mostly positive; I would definitely love to meet most of the crowd at other future events.

I didn’t particularly like Paris as a city, but I would love to come to Forum PHP again should the conference take on a more global approach (like WebcampZG did this year, forcing an all-English program). A conference requiring all talks to be in English attracts a more diverse crowd and makes sure the narrow circle of friends you’ve made locally disperses in the variety of incoming parties from all around the world. The conference was quite packed, yes – sold to capacity in fact – but I’m almost certain all of the attendees knew each other in at least some degree, and in the words of Beau, mingling is key. 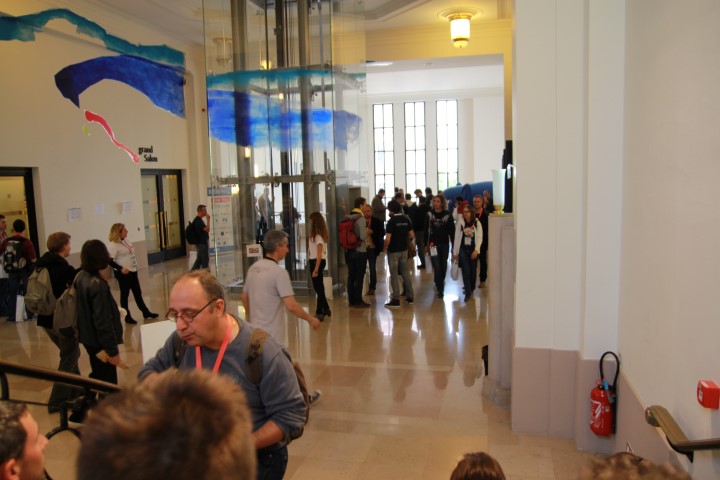 On a side note, I’m proud to announce we’ll be seeing some more national diversity on SitePoint’s PHP channel soon – several people I’ve exchanged contact information with have mentioned the desire to publish their posts (all of which sounded very interesting) on our channel, so stay tuned for some cutting edge topics popping up in November.

Once again, many thanks to AFUP for the invitation and the warm welcome, and honest congrats on an event well organized. I hope we meet again on some of the more international conferences soon!