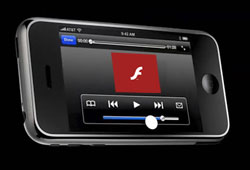 At the Flash on the Beach conference being held right now in Brighton, England, Adobe Senior Director of Engineering Paul Betlem reportedly told the audience that Adobe is working on a version of Flash player for the iPhone, and said that if Apple approves it, it will be available “in a very short time,” according to Flash Magazine. The Flash-for-iPhone rumor mill has been churning hard for the past eight months, but now it seems that Adobe is placing the ball in Apple’s court and essentially saying it’s up to them whether Flash on the iPhone ever becomes a reality.

In February, Flash was “just around the corner.” In March, though, it was “too slow” for Apple’s Steve Jobs, and Flash Lite was too limited. A couple of weeks later, Adobe CEO Shantanu Narayen said that despite Apple’s reluctance, Adobe was pushing forward. “We believe Flash is synonymous with the Internet experience, and we are committed to bringing Flash to the iPhone. We have evaluated (the software developer tools) and we think we can develop an iPhone Flash player ourselves,” he said during a conference call. Then in June, Narayen again fanned the flames by saying during an earnings call that Adobe had a version of Flash for the iPhone working in emulation.

There’s no doubt that developers want Flash on the iPhone (and for that matter, Java). Flash is one of the key RIA technologies, with 99% adoption on Internet-enabled desktops, according to Adobe’s internal statistics. The Adobe numbers also supposedly include the rather cryptic “wide range of devices,” but since the iPhone accounts for greater than 10% of the smart phone market, and Apple projects that it will sell 10 million phones by the end of this year, Flash on the iPhone is clearly important for Adobe.

The real question is, if Flash is on its way, when will AIR come to the iPhone? We reported last week about two iPhone applications currently under development that would allow web developers to take their web applications “offline” on the iPhone and access iPhone native features — such as the GPS, camera, and accelerometer — using a JavaScript API. We’d love to see Adobe come up with versions of Flex and AIR for the iPhone, as well as Flash, that would allow web app developers to easily package up their web apps for the iPhone App Store. We’d also love to see Apple let that happen.