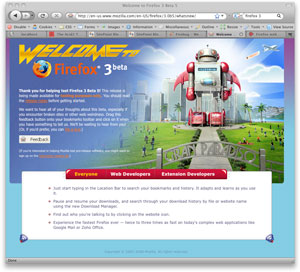 The beta 5 release of Firefox 3 was released this week, and contains the following improvements:

The new release includes 750 changes from the previous beta. In the JavaScript/DOM standards support arena, Firefox 3 still falls short of the 100/100 score that the latest developer releases of Opera and Safari achieved in the Acid3 test recently, but 71/100 is certainly an improvement on 53/100 that the current version of Firefox 2 achieves.

As mentioned in the comments, the beta release of Firebug 1.1 works fine with beta releases of Firefox 3. So what are you waiting for? Go get it already!