My desktop Evernote app prompted me to update today. After the process, I noticed this new icon sitting the top of the app window, labeled “Trunk.” This new feature that was rolled out yesterday, highlights some of the amazing projects created for and integrated with Evernote that make it one of the most powerful note-taking tools available.

But that’s not all. Here’s a look at what you can do with the Evernote Trunk.

When Evernote released their API, developers started creating apps that support, enhance and integrate with Evernote. But it can be difficult to find an app when you need it or to even know what to look for. The foundation of Evernote Trunk is a catalog of apps and products that work with Evernote.

There are currently around 100 items in the Trunk, organized by five categories: Mobile, Desktop & Web, Hardware, Gear, and Notebooks. Not only is this an awesome feature for Evernote users, but it also gives developers a way to get their project found and used. I started poking around and already noted a handful of apps in the Mobile category that I’m going to test out as soon as I finish writing this (which I’m doing in Evernote, by the way). 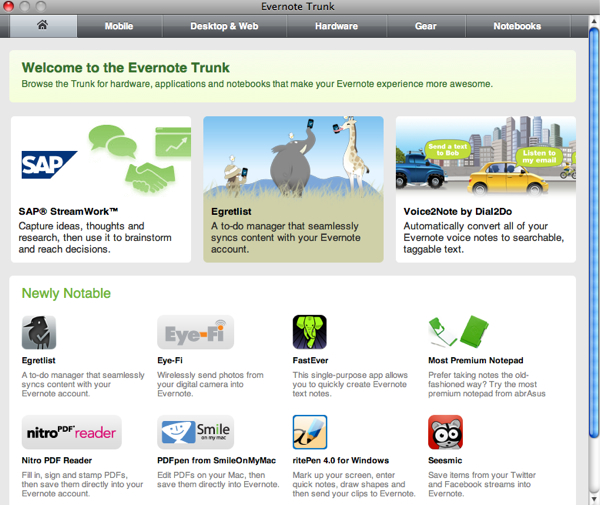 The Notebooks category in the Evernote Trunk is a new take on content sharing and distribution. It contains Notebooks from a few third-party companies on a different topics, that you can import directly into Evernote.

Let’s say for example, this post inspired you to download and install Evernote, but you don’t know what to do next. You can import the Evernote Tips notebook right into your account to get some ideas on how to use Evernote to its fullest.

Here’s how Evernote describes this feature:

Like adding a new book to your shelf, once you choose a notebook from one of our partners, it will instantly appear in your account. But that’s only the beginning. If for example, you choose the Make:Projects Home and Garden notebook, Evernote will add a notebook full of great do-it-yourself projects into your account. In Evernote that notebook is more than a piece of static content, it’s a starting point for all of the other DIY projects you come across … What makes these branded Notebooks so intriguing is that all of the content represents the jumping off point for your creativity and exploration.

There’s not a lot of content available yet, but there is definitely some good potential here.

Did you know that there are scanners that scan directly into Evernote? Or services like OfficeDrop, that let you mail documents in, have them scanned and then imported right into your Evernote account? There are a number of companies that are partnering with Evernote to integrate their products and services. These are things that you may already use or need that can help you become more productive because they work directly with Evernote.

Evernote plans to continue to add to this new functionality, including new Notebooks and apps. Personally, I think this is a cool addition, particularly the app showcase. I already use Evernote for idea management, but with an easier way to find apps that will expand how I use it, it’s a win in my mind.

5 Apps You Can Use with EvernoteAlyssa Gregory

How I Use Evernote to Manage My IdeasAlyssa Gregory