As we wrote, one of the coolest features of the new Flash 10 player, that dropped today, is the Pixel Bender image processing technology. The neat thing about Pixel Bender is that despite its pedigree as the technology behind Adobe’s industry standard video post production software After Effects, Pixel Bender is useful for a lot more than just applying visual effects to images.

Adobe senior product manager Justin Everett-Church told me that Pixel Bender is essentially just an engine that does math calculations very, very fast. And because it supports multicore CPUs (whereas ActionScript does not), and is asynchronous and runs processes in their own thread, it won’t slow down your application while you’re computing massive calculations.

It was in large part because of this new capability in Flash that Denver-based companies EffectiveUI and Intelligence Gaming chose Flash 10 to power their new “RealityV” immersive video simulation platform.

RealityV is a video story telling technology that puts users in a 360 degree, 3D environment that includes binaural sound. The two companies, which collaborated on the technology, are using Pixel Bender to blend 8 channels of 360 degree audio in real time based on user input. That was something that couldn’t be done in Flash 9 (or rather, it could be achieved programmatically with ActionScript, but not in real time). And because Pixel Bender does high level mathematical computations on a separate thread, it doesn’t slow down the app while rendering the audio. 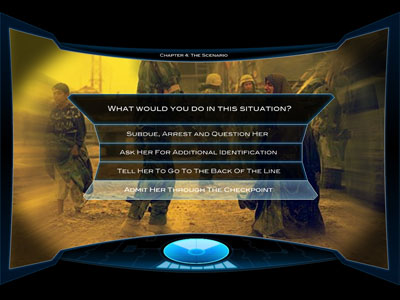 Using off the shelf video headsets, RealityV is able to offer a very immersive experience. If a user turns his head, the audio and video shifts accordingly, for example, and changes in real time (this is what Pixel Bender allows them to do). 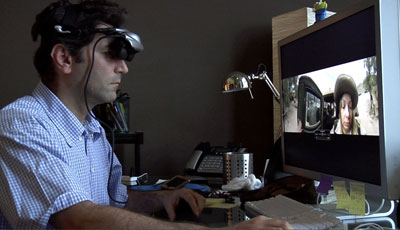 Intelligence Gaming is marketing the RealityV platform to the military to create cultural simulations that can be used to train soldiers on how to properly diffuse tense situations in foreign lands when cultural barriers may be present. In the future, Intelligence Gaming hopes to market RealityV for other training applications, such as medicine, law enforcement, first response, or any task where a quick decision under pressure is necessary for success. “The RealityV development framework is also an ideal technology to support the travel industry to provide virtual tours, the entertainment field to offer immersive movie shorts, and the behavioral sciences to assess human physiological responses to environmental scenarios,” said the company in a press release.

We can’t wait to see choose your own adventure novels finally translate to the silver screen!