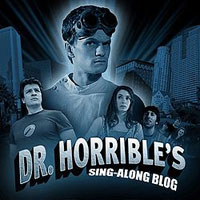 In July, when Joss Whedon (creator of popular television series such as Buffy the Vampire Slayer, Angel, and Firefly) announced the release of a straight-to-web short video series, I was one of the eager fans loading up the first installment at the stroke of midnight and causing their servers to crash.

Dr. Horrible’s Sing-a-long Blog was born out of the 2008 writer’s strike in Hollywood, but has become a model for professional content distribution in a post-TV world. Dr. Horrible is not your average YouTube clip — it is a highly polished piece of cinema starring well-known actors, such as Neil Patrick Harris (Doogie Howser, M.D., How I Met Your Mother) and Nathan Fillion (Firefly). However, the entire thing was shot in 6 days for just $200,000 — about the cost for a rather low budget hour-long television episode, and the plan from the start was to give it all away for free on the Internet.

That’s pretty unconventional thinking in Hollywood, but Dr. Horrible was an overnight success, almost certainly due in large part to Whedon’s sizable cult following. Compete reports that Dr. Horrible’s distribution site attracted 350,000 visitors in July — that alone would be impressive considering the initial free run of the show only lasted for 3 days, and the real number is likely much higher. Co-creator Maurissa Tancharoen estimated that the Dr. Horrible site was serving over 200,000 “hits” per hour during those first few days.

Though his already large and dedicated fan base was a pretty good guarantor of success, Whedon also used his considerable web savvy to build buzz for the series, including reaching out to bloggers, creating an online comic that was distributed on MySpace, and introduced some of the film’s characters, and soliciting fan made videos for DVD special features. Whedon and his crew also set up the usual social networking profiles at Twitter, MySpace, and Facebook.

Dr. Horrible has been so successful that it won a People’s Choice Award, and was named the 4th best television show of 2008 by Time Magazine even though it has never aired on television. Its site and social networking profiles are still updated almost daily 6 months later and have developed a cult following.

Of course, popularity is nice, but did it make money? The short answer is: yes. At least enough to pay for development and probably a lot more. Following the 3 day free release on drhorrible.com, the 3-part video series was released on iTunes as a paid download where it quickly rose to #1 in the television category and stayed there for 5 weeks. Later, it made its way to Hulu , where it is supported by advertising, and in December it was released on Amazon in DVD format. How is it doing? About 3 weeks after release, Dr. Horrible is the third best selling movie on Amazon, making it more popular than mega-blockbusters The Dark Knight and Wall-E (movies that will both likely be Oscar nominated).

Just the iTunes sales were enough to pay for the $200,000 budget according to Whedon. “We’ve been able to pay our crew and all our bills, which means a lot. What means more is proving that completely independent ventures can muscle their way through the blizzard of big-budget behemoths,” he wrote in November.

Since then, Dr. Horrible has become a hit DVD, with other merchandising added on (such as a soundtrack CD, t-shirts, etc.).

The question, of course, is whether Whedon’s success can be replicated by anyone not named Joss Whedon. Like Trent Reznor, Whedon already had a huge fan following built via years of traditional, commercial success. Nonetheless, Dr. Horrible has shown that there is a way for professional content to be profitable and successful using a free, web-based distribution model. There is a future for television after the death of television, after all.