Mozilla just rolled out beta 11 of the upcoming 4.0 version of Firefox. Mostly, this release consists of bug fixes and performance improvements, but the one new feature that’s particularly interesting is the introduction of a “Do Not Track” preference. Available in the Advanced tab of Firefox’s Preferences window, it’s a simple checkbox to inform sites you browse that you’d prefer not to be “tracked.” Here’s what the option looks like: 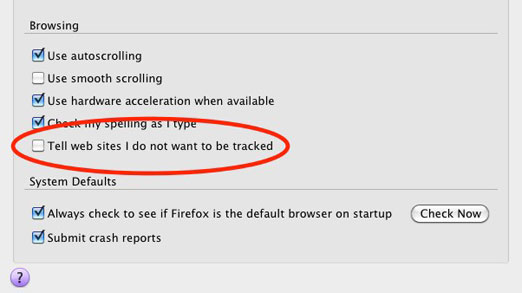 Online behavior tracking is an increasingly prevalent technique used by websites, social networks, and advertisers to track the clicks, searches, and browsing patterns of Internet users with the help of sessions, cookies, or other even sneakier methods. Tracking is seen by many as an invasion of privacy, as it generally occurs without the end user being made aware of it. The Electronic Frontier Foundation, for instance, has a page dedicated to explaining the practice and outlining potential dangers, and has also published a video on YouTube to spread awareness of the issue.

That said, many advertisers reap significant benefits from tracking, as it allows them to serve hyper-targeted ads to site visitors based on their browsing history.

So what does this new feature in Firefox actually do? Under the hood, when the checkbox is ticked, Firefox simply sends an additional “DNT” HTTP header with all requests. Seen through the lens of Firebug’s Net panel, here’s what that looks like:

Of course, this extra header does strictly nothing unless websites choose to honor it. It’s a little awkward to see Mozilla stepping out on a limb with this; had they announced this feature with the backing of a big player like Google or Facebook, who agreed to respect the new setting, it might have been a much bigger bombshell.

However, the release of a feature like this still has the potential to have some impact. On one hand, it can raise awareness of the issue of tracking with a greater number of Firefox users, who may then be displeased when they learn that the websites they visit are ignoring their preference to not be tracked (although it’s unclear at this point how they would learn this). But even more significantly, the US FTC (Federal Trade Commission) is considering legislation that would make this setting a legal requirement. Having an existing technical implementation of the preference setting “in the wild” might give legislators a stronger argument for the feasibility of such measures.

Finally, I think Google could have an interesting role to play in the development of this standard, as a large player that’s both an online advertiser and a browser vendor. If this feature is a selling point of Firefox 4, there will be pressure on Chrome to support it as well. But Google couldn’t really add Do Not Track support to its browser without also honoring the header on its sites and ads (at least not without appearing very hypocritical).

Whatever happens, I think Mozilla deserves to be applauded for taking a step in the right direction. It will certainly be interesting to watch this unfold over the coming months (and perhaps years).

What are your thoughts on the Do Not Track header? Does it have legs? Or is it DOA without support from advertisers?

UPDATE: The Do Not Track header option has also been added to the release candidate of Internet Explorer 9 (thanks Michael).

How to Track Outbound Links in Google AnalyticsCraig Buckler

Which Metrics Should Your Web Business Track?John Tabita