A big part of the success of the iPhone, and the iOS ecosystem as a whole, has been Apple’s focus on both the aesthetic and the experience of the platform and its applications. Apple did an enormous amount of work establishing the most common application design models while ensuring flexibility for their developers and consistency for their users. While our goal isn’t to build an application that attempts to mimic the exact experience of using a native application, there’s still plenty to be learned from examining the structure and design patterns used in mobile operating systems. Understanding the interfaces our users expect is important; it allows us to decide when it’s worth trying to meet those expectations, and when to go in another direction.

Let’s take a look at a few mobile design patterns we might find useful in our application.

Imagine some playing cards placed side by side in the screen, where users can flick between each “card” by sliding over the screen to the left or to the right. 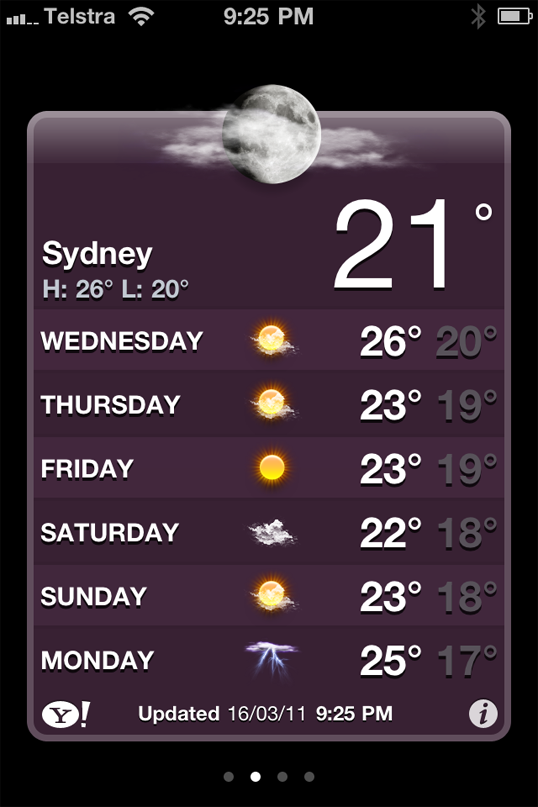 Figure 2.2. The carousel pattern in the flesh in Apple’s Weather app

WebOS also uses the carousel pattern for switching between applications. Apps that use this pattern are normally information-rich but interaction-poor.

The carousel is the simplest pattern we’ll look at—it usually consists of a single type of content organized in a linear set. What’s nice about the carousel is that it’s simple (which is good, remember?). The interface is minimal and the data structure is incredibly easy to understand. It also offers an implicit hierarchy of importance: the first items are the easiest to access, and are usually of the most interest to our users. The flip side to this structure is that there’s no way to move between views more than one card away.

The tab bar pattern can be seen everywhere in iOS, Android, and webOS. For web designers and developers, tabs aren’t exactly a new idea. We’ve been using them to establish hierarchy and group content into sections for many years. Conceptually, tabs in mobile applications are identical to those in desktop websites; the main difference is that the tab bar usually has a fixed position in mobile applications, and so always appears on the screen. It’s interesting to note that on iOS, the tab bar component appears at the bottom of the page (near your thumbs), whereas on Android, the convention is to have the tab bar at the top of the screen (leading into the content). 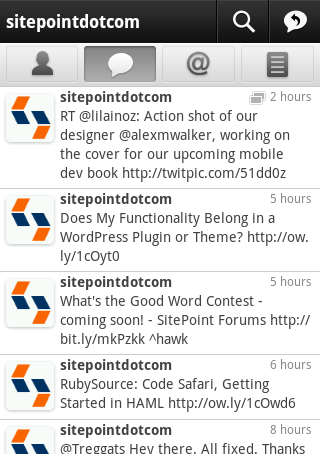 Figure 2.3. The tab bar in use in the Twitter app

Lists are the most commonly used design pattern for mobile applications. The list as an interface model is fairly self-explanatory: content is displayed in a vertical list, allowing users to scroll through the options. In iOS, they can be seen everywhere, featuring in all but the simplest of utility applications. While basic, they’re also incredibly flexible. Lists can be used for presenting actionable options; acting as an index for a long list of content; and, most importantly, as a navigation hierarchy that lets users work their way down a tree structure.

It’s as a navigation model that lists are most powerful. There are really no limits to the depths of navigational hierarchy that lists can accommodate and so, for applications with a structure more than one level deep, the list is almost universally turned to.

This pattern maps perfectly to the framework we’re used to dealing with online. The list structure is a tree that can lead anywhere, and often it’s used to let users drill down from an index of items to a detailed view of a single item. This is known as the master/detail pattern, a model that’s used in desktop and mobile applications all the time. Just about every email application ever made uses this pattern of interaction, letting us quickly skim through the available items and then focus on a single one. We’ll return to this idea a little later on.

For example, News.com.au uses the list pattern, allowing users to skim the headlines before moving into whichever story catches their interest, as you can see in Figure 2.4, “Lists are commonly used by news apps”. 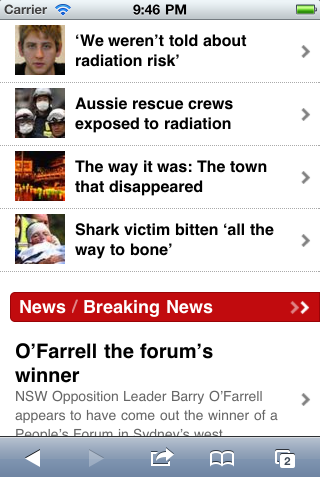 The main limitation of lists is that as soon as a user moves down the tree, they lose the ability to move to any items on the levels above in one simple step. From four levels down, they would have to retrace back three levels to return to the top level—not ideal. To overcome this deficiency, the list structure is often combined with the tab bar pattern to create a strong, structured navigation with depth and flexibility.

Remember, these patterns offer a suggested structure—we don’t have to use them. Familiarity and consistency can lend a design authority, but you can still break the mold. There are a myriad of examples of applications out there that eschew UI conventions to create delightful, intuitive, and unique interfaces for their users; by the same token, there are many apps that move away from these simple patterns without good reason and end up confusing and frustrating users.

We should always consider how breaking convention might enhance or detract from our app’s primary task. If we’re unable to design a better alternative to the conventional pattern, we probably shouldn’t do it.

An interaction designer, Max Wheeler believes interactive media should function as beautifully as it looks. He currently resides in Canberra, Australia, where he works with Icelab, a media-agnostic design agency filled with nice, well-caffeinated people. Aside from client work, Icelab's projects include the community-oriented Decaf Sucks and real estate startup RentMonkey. When Max is not designing or building things for the Web, he takes photographs, travels the world, plays Ultimate frisbee for Australia, and drinks twice the daily recommended intake of espresso. On occasion, he's been known to drop in at Web Directions South to speak about building mobile web applications.