How to Debug a Node.js Application: Tips, Tricks and Tools

Software development is complex and, at some point, your Node.js application will fail. If you’re lucky, your code will crash with an obvious error message. If you’re unlucky, your application will carry on regardless but not generate the results you expect. If you’re really unlucky, everything will work fine until the first user discovers a catastrophic disk-wiping bug.

Debugging is the black art of fixing software defects. Fixing a bug is often easy — a corrected character or additional line of code solves the problem. Finding that bug is another matter, and developers can spend many unhappy hours trying to locate the source of an issue. Fortunately, Node.js has some great tools to help trace errors.

Debugging has its own selection of obscure jargon, including the following:

How to Avoid Bugs

Bugs can often be prevented before you test your application …

Use a Good Code Editor

Node.js devs are spoiled for choice with free editors such as VS Code, Atom, and Brackets, as well as plenty of commercial alternatives.

Use a Code Linter

A linter can report code faults such as syntax errors, poor indentation, undeclared variables, and mismatching brackets before you save and test your code. The popular options for JavaScript and Node.js include ESLint, JSLint, and JSHint.

These are often installed as global Node.js modules so you can run checks from the command line:

However, most linters have code editor plugins, such as ESLint for VS Code and linter-eslint for Atom which check your code as you type: A source control system such as Git can help safe-guard your code and manage revisions. It becomes easier to discover where and when a bug was introduced and who should receive the blame! Online repositories such as GitHub and Bitbucket offer free space and management tools.

Does a bug exist if no one knows about it? An issue-tracking system is used to report bugs, find duplicates, document reproduction steps, determine severity, calculate priorities, assign developers, record discussions, and track progress of any fixes.

Test-driven Development (TDD) is a development process which encourages developers to write code which tests the operation of a function before it’s written — for example, is X returned when function Y is passed input Z.

Tests can be run as the code is developed to prove a function works and spot any issues as further changes are made. That said, your tests could have bugs too …

It’s tempting to stay up all night in a futile attempt to locate the source of a nasty bug. Don’t. Step away and do something else. Your brain will subconsciously work on the problem and wake you at 4am with a solution. Even if that doesn’t happen, fresh eyes will spot that obvious missing semicolon.

Environment variables that are set within the host operating system can be used to control Node.js application settings. The most common is NODE_ENV, which is typically set to development when debugging.

Environment variables can be set on Linux/macOS:

Internally, an application will enable further debugging features and messages. For example:

NODE_DEBUG enables debugging messages using the Node.js util.debuglog (see below), but also consult the documentation of your primary modules and frameworks to discover further options.

Note that environment variables can also be saved to a .env file. For example:

Then loaded using the dotenv module:

Various command-line options can be passed to the node runtime when launching an application. One of the most useful is --trace-warnings, which outputs stack traces for process warnings (including deprecations).

Any number of options can be set, including:

By way of an example, let’s try to log the crypto module’s DEFAULT_ENCODING property, which was deprecated in Node v10:

Now run this with the following:

We’ll then see this:

However, we can also do this:

That produces the following:

Note that the same options can also be passed to nodemon.

One of the easiest ways to debug an application is to output values to the console during execution:

Few developers delve beyond this humble debugging command, but they’re missing out on many more possibilities, including these:

console.log() accepts a list of comma-separated values. For example:

Larger objects can be output as a condensed string using this:

util.inspect will format objects for easier reading, but console.dir() does the hard work for you.

When the NODE_DEBUG environment variable is set to myapp (or a wildcard such as * or my*), messages are displayed in the console:

By default, util.debuglog is silent. If you were to run the above script without setting a NODE_DEBUG variable, nothing would be output to the console. This allows you to leave helpful debug logging in your code without cluttering the console for regular use.

In the following sections, the pagehit project developed in other tutorials is used to illustrate debugging concepts. You can download it with:

Or you can use any of your own code.

Node.js is a wrapper around the V8 JavaScript engine which includes its own inspector and debugging client. To start, use the inspect argument (not to be confused with --inspect) to start an application:

The debugger will pause at the first line and display a debug> prompt:

You can step through the application by entering:

If this sounds horribly clunky, it is. Only use the built-in debugging client when there’s absolutely no other option, you’re feeling particularly masochistic, and you’re not using Windows (it’s often problematic).

The Node.js inspector (without the debugger client) is started with the --inspect flag:

Note: nodemon can be used instead of node if necessary.

This starts the debugger listening on 127.0.0.1:9229, which any local debugging client can attach to:

If you’re running the Node.js application on another device or Docker container, ensure port 9229 is accessible and grant remote access using this:

Alternatively, you can use --inspect-brk to set a breakpoint on the first statement so the application is paused immediately.

Open Chrome and enter chrome://inspect in the address bar. 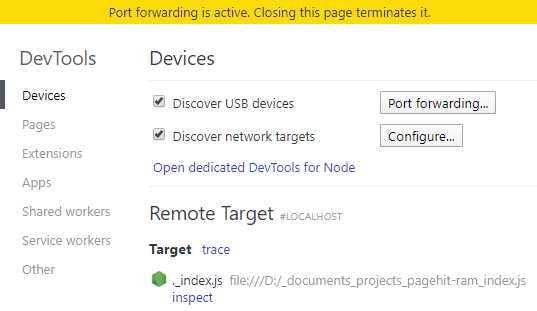 Note: if the Node.js application does’t appear as a Remote Target, ensure Discover network targets is checked, then click Configure to add the IP address and port of the device where the application is running.

Click the Target’s inspect link to launch DevTools. It will be immediately familiar to anyone with browser debugging experience. The + Add folder to workspace link allows you to select where the Node.js files are located on your system, so it becomes easier to load other modules and make changes.

Clicking any line number sets a breakpoint, denoted by a green marker, which stops execution when that code is reached: 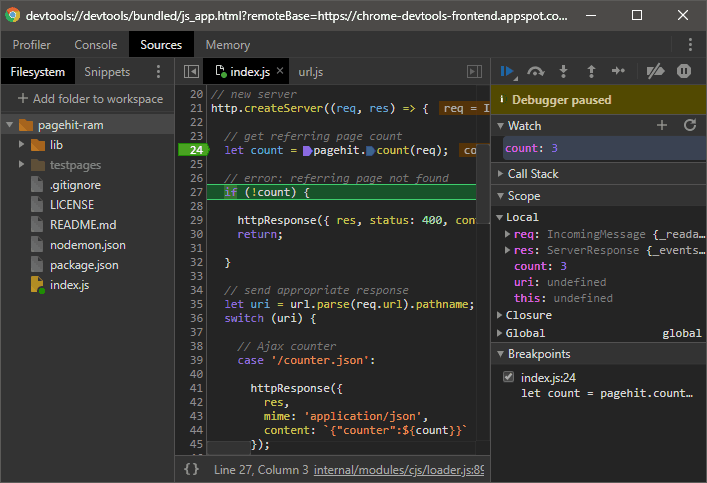 Variables can be added to the Watch pane on the right by clicking the + icon and entering their name. Their value is shown whenever execution is paused.

The Call Stack pane shows which functions were called to reach this point.

The Scope pane shows the state of all available local and global variables.

The Breakpoints pane shows a list of all breakpoints and allows them to be enabled or disabled.

The icons above the Debugger paused message can be used to resume execution, step over, step into, step out, step through, deactivate all breakpoints, and pause on exceptions.

Node.js Debugging with VS Code

VS Code Node.js debugging can be launched without any configuration when you’re running a Node.js application on your local system. Open the starting file (typically index.js), activate the Run and Debug pane, and click the Run and Debug Node.js (F5) button. 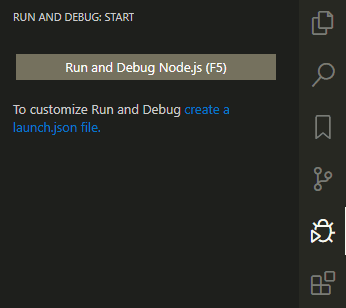 The debugging screen is similar to Chrome DevTools with a Variables, Watch, Call stack, Loaded scripts, and Breakpoints list. 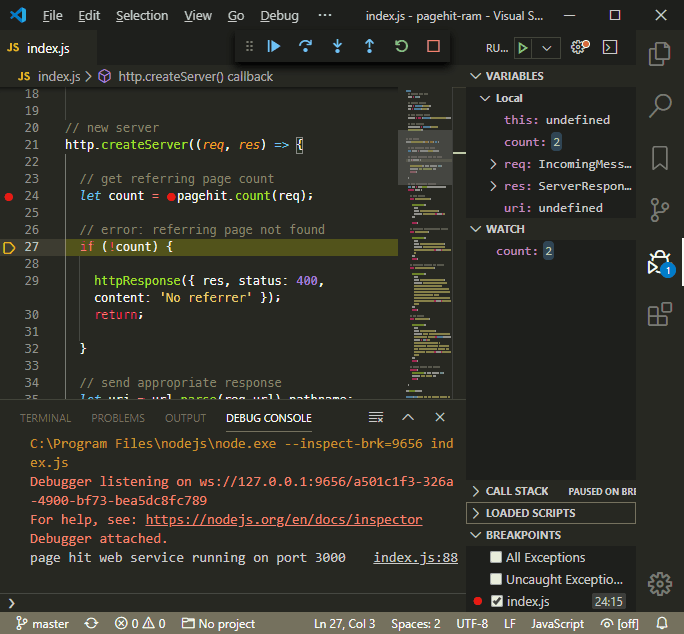 A breakpoint can be set by clicking the gutter next to the line number. You can also right-click. With this right-click, you can set the following:

Note: don’t forget to hit Return for VS Code to create your conditional breakpoint or logpoint.

The debugging icon bar at the top can be used to resume execution, step over, step into, step out, restart, or stop the application and debugging. Identical options are also available from the Debug item in the menu.

For more information, refer to Debugging in Visual Studio Code.

Further configuration is required when you’re debugging a remote service or need to use different launch options. VS Code stores launch configurations in a launch.json file generated inside the .vscode folder within your project. To generate or edit the file, click the cog icon at the top right of the Run and Debug pane. 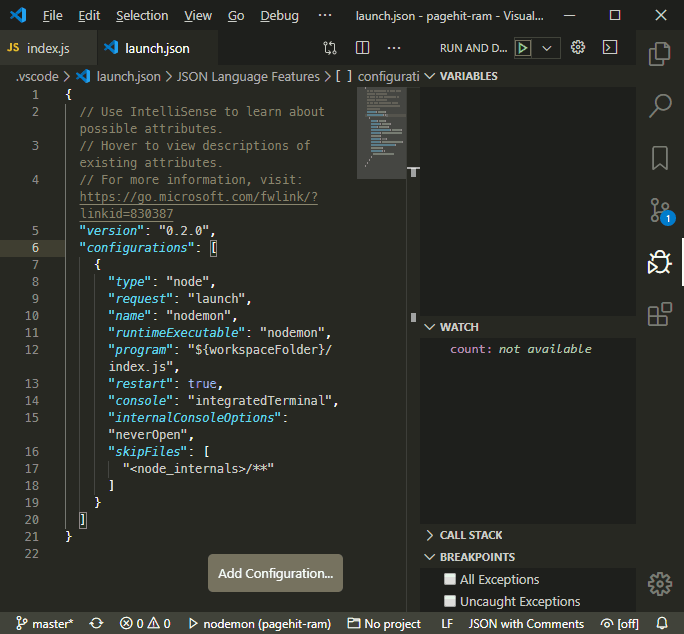 In the example above, a single Nodemon launch configuration has been defined. Save launch.json, select nodemon from the drop-down list at the top of the Run and Debug pane, and click the green start icon.

The Node.js Debugging Guide provides advice for other IDEs and editors including Visual Studio, JetBrains, WebStorm, Gitpod, and Eclipse. Atom also has a node-debug extension.

ndb offers an improved debugging experience with powerful features such as attaching to child processes and script blackboxing so only code in specific folders is shown.

The IBM report-toolkit for Node.js works by analyzing data output when node is run with the --experimental-report option.

Finally, commercial services such as LogRocket and Sentry.io integrate with your live web application in both the client and the server to record errors as they’re encountered by users.

Node.js has a range of great debugging tools and code analyzers which can improve the speed and reliability of your application. Whether or not they can tempt you away from console.log() is another matter!