How to Create Multiple Borders in CSS3

The CSS2.1 border property has served us well but it’s a little basic. What if you require two or more borders in different colors? The CSS3 border-image property is an option but it still requires Photoshopping shenanigans and the syntax is quite complex. However, if you simply need a series of solid-color borders, there is an easier alternative: the box-shadow property. 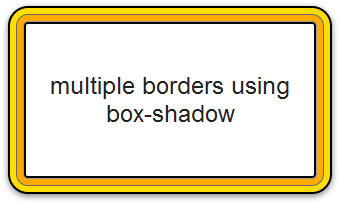 The little-used spread argument can be used to create a border. For example, a 1 pixel solid black border can be created using no blur and a 1px spread:

Unlike the border property, box-shadow permits multiple shadows separated with a comma. The last shadow defined sits at the bottom of the stack so, to create the box shown above, we use this code:

Some will consider it a hack, but it’s an quick solution for multiple borders which doesn’t require images.