UNION SQL Query are not working

I am trying to create the query with UNION where I have two same tables but the condition in both tables are different. I am getting output as below structure

but I expect it will come like this below

Please help to get the expected output in your suggested methods

UNION adds rows to the end of the set.
JOIN adds columns to the set.

(this is an oversimplification, but it gets the point across)

How I make it correct

That’s not going to work, Thallius, because it mixes aggregates and non-aggregates without a GROUP BY Clause

That’s not going to work, Thallius, because it mixes aggregates and non-aggregates without a GROUP BY Clause

Thanks, I forgot the SUM of course

I forgot the SUM of course

you had the SUM inside the CASE, when you should’ve had the CASE inside the SUM

you had the SUM inside the CASE, when you should’ve had the CASE inside the SUM

Yes this happens if you try to help on a Monday

Why do you have “two same tables”?

there’s actually only one

I noticed that on mine yesterday, until your comment about the forum change (which I’d forgotten) I thought it was a big coincidence.

As you’ve probably realised, late August 2014 was when members were imported from vBulletin to Discourse. Large numbers of members have join dates of 29th and 30th.

The only folk with earlier join dates are members who were staff at the time of the move, and had been testing Discourse prior to the migration. e.g.: 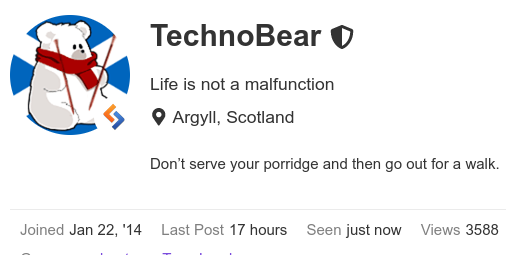