My new favorite quote to vegetarians

Well, not all the pizzas, of course

If God didn’t want us to eat animals, why did he/she make them out of meat?

I think we are totally entitled to eat meat - we are a part of the food chain as much as any other animal. My personal complaint is with the factory farms and the mistreatment of the animals that will be / are slaughtered. If I had my own ranch, my own animals, and knew I killed them as humanely as possible, I’d totally eat meat again. But there’s just too many horrible things that go on. Nowhere does it say that torture of any sentient being is okay. That’s why I can’t support it. Not because I don’t like the taste of it, or I think it’s unhealthy, or any of the other reasons.

As a matter of fact, vegetarians do have to complement their diet to make it up for the protein that they will miss when they stop eating meat.

It’s not hard to come by protein- true. But it’s rare to find a serving of food like htat that doesn’t have more than 5 grams of protein. You should ideally be eating around 1lb per pound of LBM.

Even M&Ms have protein…so your logic about protein not hard to come by is a bit flawed. FOod is still unhealthy.

I agree with @RyanReese . I’ve heard many vegans/vegetarians make the statement that protein is available in many vegetables.

But vegetables have a very slim fraction of the protein that meat has. You’d have to eat ten times the amount of veggies to get the same amount you’d get from animal protein.

Not to mention that the amino-acids in plant protein differs enough from animal protein that you wouldn’t necessarily get the same protein that your body needs. Many nutritional studies have shown that a “diverse” source of protein is actually the healthiest option (ie, strict herbivores and strict carnivores aren’t getting as healthy a dose of protein as someone who eats both veggies and meat.)

And I don’t have a source for this next bit, but it’s always been my understanding that early man learned to invent things, and even make and keep fire, after he started adding animal protein to his diet.

So, I can respect your position, @tornadoali, and I greatly appreciate that you’re NOT one of the militant vegans that I’ve had the misfortune to converse with. But a balanced, healthy diet does require both veggies AND meat.

Yes, it’s pretty awful. Some say that if we were really serious about halting climate change, the biggest impact we could have is through stopping the production of animals for food.

we went all serious on this post that started funny. i saw a shirt today with a deer on it and it said “hey vegetarians! My food poops on your food!” hehehe

we went all serious on this post that started funny. i saw a shirt today with a deer on it and it said “hey vegetarians! My food poops on your food!” hehehe

I only read your post so I felt the need to contribute some information. Simple as that.

But a balanced, healthy diet does require both veggies AND meat.

I agree with you though, in that I DO think people were meant to be omnivores.

I only read your post so I felt the need to contribute some information. Simple as that.

No worries! I wasn’t complaining at you at all!

If God didn’t want us to eat animals, why did he/she make them out of meat?

OK, I have to jump in here.

First off, I love meat, but try to not eat too much of it for reasons I will discuss.

Second off, please don’t take any of this offensively, people often don’t respond well to being corrected.

the truth is tha we, humans, process meat and fish better than vegetables because thousands of years before we became omnivorous, we were carnivorous.

We don’t process meat and fish better because for million of years we have been eating mainly nuts, fruit and veg, with a small quantity of meat. That is what our bodies have evolved to eat and run on. At one time we may have been carnivorous, but at one time we were like rats, tried digging a burrow with your finger nails? At one time we were fish, tried swimming across the pacific ocean? Tried getting your oxygen from water?

This is why we have evolved to have the teath we have, suitable for eating vegetation, nuts and meat.

People get too hung up on exact amounts of various vitimins and proteins etc. Peddled to us via media. In reality, the human body and huge variation of it’s environment is so complex that we don’t know enough to say you should eat x amount of y. That is something Dr Goldberg talks about a lot on his award winning book Bad Science. His article here is quite on topic.

Then there is the effect on the environment. I can’t find the chart, but somewhere there is a fantastic chart showing the effect the average meat portion size per day has against the amount of greenhouse gas as a result. It is a hockey stick graph, so up to a certain amount of meat per day results in not much difference in greenhouse emissions, and then it starts going up rapidly.

So for health and the environment, I personally don’t eat meat for a few days, and then have a decent portion of it.

Save a cow, eat a vegetarian

Second off, please don’t take any of this offensively, people often don’t respond well to being corrected.

Excuse me… Are YOU correcting ME? HOW DARE YOU?

I could be perfectly wrong (but don’t tell anyone ;)). This was something I read a long time ago and I don’t have the source of it. Maybe I remember it wrong. Maybe the article simply said that we process protein better (and I assume that it was meat because we always do that association). Or maybe I’m making it up (I hope not! :p)
I’m perfectly fine with being corrected.

I personally don’t believe in it, and I don’t think it is good although I understand the reasons for someone to choose it.

Probably, it is healthier to be vegetarian than carnivorous… Maybe because the amount of hormones added to the meat in some countries doesn’t help to make it healthy.

But the truth that in both cases, the human body will adapt and if you don’t exaggerate your intake of meat to impossible levels, chances are that you will live more or less like a vegetarian.

Having said this, the countries where life expectancy is higher are well know for the variety of their diet, and that includes meat (and fish, and eggs, and vegetals, and fruits…)

Of course, there are lots of factors that can affect life expectancy but in countries with similar development, it is obvious that food is one of those factors.

Save a cow, eat a vegetarian

Works for me!!!
(Oh wait, this is a family-friendly forum…)
LOL

Can a bull eat a cow? 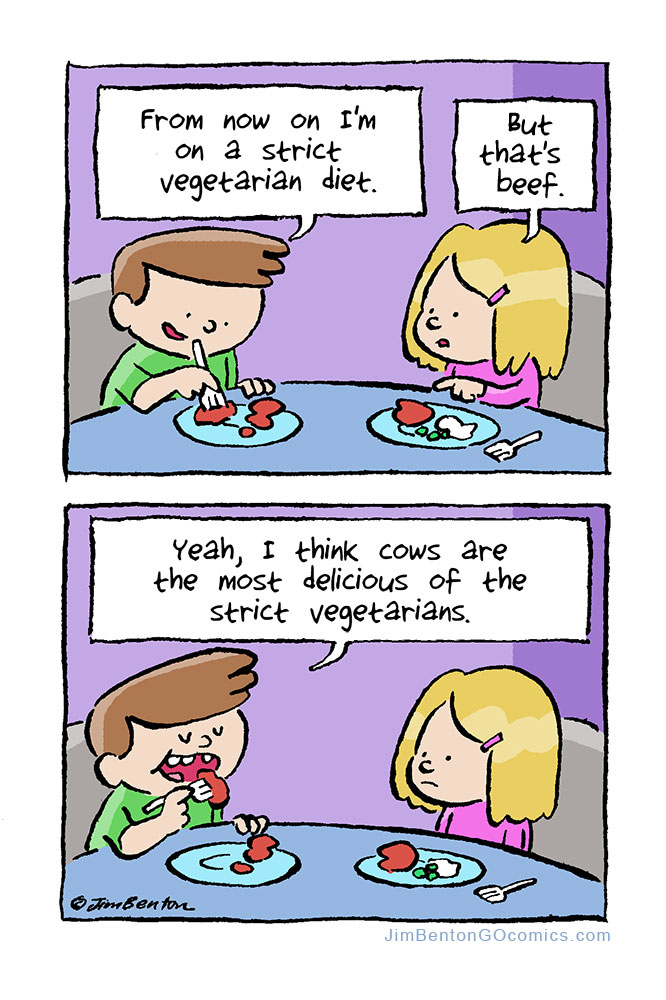