Everyone knows how cool CoffeeScript is. If not, then here’s the elevator speech. CoffeeScript is a small language that compiles into JavaScript. Whether you’re just beginning JavaScript, or you’re a seasoned veteran, CoffeeScript will make your life easier. You still need to know how to work with CSS, but CoffeeScript allows you to write CSS once and use it in multiple places. This is something I’ve wanted for a long time and now it’s here.

Before running CoffeeScript inside Visual Studio, it’s important to know that you can run it as a standalone web page. All you need to do is reference the CoffeeScript JavaScript file. A simple CoffeeScript example is shown below. The results of the example can be seen with this jsFiddle.

Thanks to NuGet there are some excellent packages to make integrating CoffeeScript with Visual Studio painless. Taking CoffeeScript development to the next level, there’s a great New Zealand company called Mindscape, and they have a product called Web Workbench. Web Workbench integrates into Visual Studio and it gives you compile time error checking as well as intellisense when you’re working with CoffeeScript files. There’s a free version and a pro version, which carries a one time fee. The pro version minifies the JavaScript whenever you save the file you’re working on. 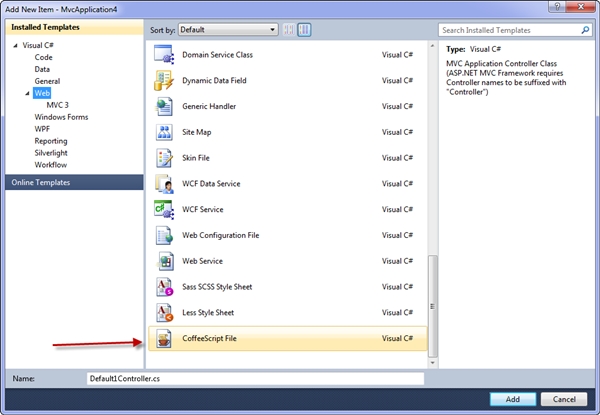 Add a .coffee file named coffeedemo.coffee. Once the file is added, insert the following code, which displays a message when the page loads. Don’t worry about the syntax right now. I’ll cover that in an upcoming series.

Next, save the file. You will see two new JavaScript files, coffeedemo.js and coffeedemo.min.js, added to your project, as shown in the following figure. Every time you save your CoffeeScript files, Web Workbench will compile and create these minified and beautified versions.

The final step is to add a reference to the JavaScript file in your web page. To do this, add the following script tag. If you run the project now, you’ll see a dialog box saying “I am running from CoffeeScript!”

CoffeeScript is a great language to learn. It’s refreshing to learn a new language that compiles into JavaScript that, in all honestly, is probably better than the JavaScript I produce. I’ll focus some upcoming articles on CoffeeScript syntax in the coming weeks.

Meet the author
Malcolm Sheridan
Malcolm Sheridan is a Microsoft awarded MVP in ASP.NET, ASPInsider, Telerik Insider and a regular presenter at conferences and user groups throughout Australia and New Zealand. Follow him on twitter @malcolmsheridan.