Cloud computing in its various incarnations — SaaS, PaaS, IaaS — has had big successes. Some of us still recall the $212 million purchase of PaaS provider Heroku in 2010, which at that time was — architecturally speaking — little more than a high-level deployment layer. It had a very posh gem for smooth and easy deployment of apps and frameworks like RoR, Python or Node apps running on Amazon’s infrastructure. The concept of Serverless Computing was born.

There have been a host of different models for cloud products ever since then. Various experiments have come and gone as providers looks for the sweet spot, with proliferation continuing and new terms being born, like BaaS and MBaaS.

Protocol Labs, a crypto startup looking to redefine the cloud model, collected $257 million in its 2017 ICO, breaking all records. Airtable, with its high-level, spreadsheet-meets-database products and api, reached a $1.1 billion valuation in its 2018 financing round.

Serverless computing is a subset term of cloud computing that makes a point of doing away with the classical server product, providing developers with a high-level environment to run their code, charged on an as-used basis, and freeing those developers from worrying about the underlying software stack.

Serverless computing has allowed further flexibility in paying for used processing power, rather than paying for pre-allocated packages as with classical cloud.

The term “serverless” is semantically wrong, because the code is still executed on a server, but users conceptually don’t have to deal with servers anymore. Provided certain conventions are adhered to, the underlying stack, and all the infrastructure and deployment issues, are handled by vendors.

The main type of product that sprang out from this is FaaS — a cloud execution environment, or a runtime that allows deployment of code without any boilerplate. Amazon’s Lambda, Oracle Fn and Alibaba’s Function Compute are some examples.

Cloudflare is a San Francisco company that was started nine years ago. It’s a Content Delivery Network that provides delivery of static assets for websites from its global network of edge nodes. It also provides firewall and DDOS protection, and has a reputation for the fastest DNS service on the internet.

When talking about Cloudflare, and what it brings to the arena of serverless computing, it’s necessary to add one more term to the list of cloud buzzwords we used here — edge computing.

As explained on Wikipedia: 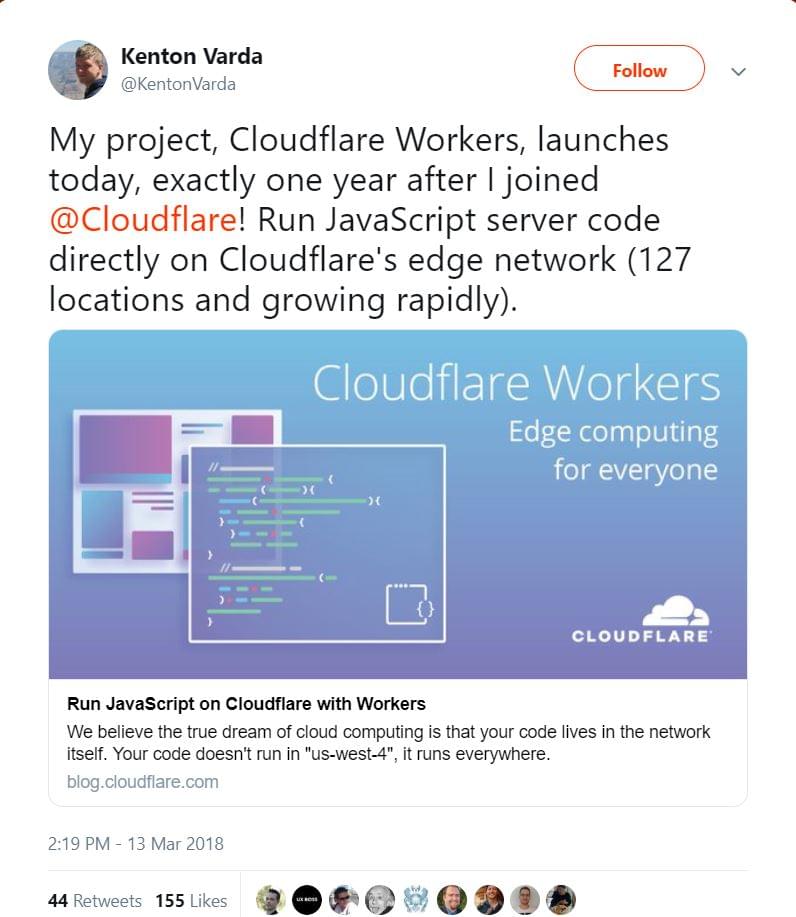 Cloudflare Workers are a peculiar, and powerful, incarnation of FaaS (function as a service), with code being instantly deployed to Cloudflare’s global network of nodes, to be executed as close as possible to the visitor.

As Kenton Varda has said on the Cloudflare blog:

Cloudflare Workers are a code execution environment designed on V8, the JavaScript engine designed for Google Chrome and used also by Opera, Node.js, Brave browser, Electron, and others.

Workers use the Service Worker API — but the code resides on Cloudflare, not in the browser.

They can “modify your site’s HTTP requests and responses, make parallel requests, and even reply directly from the edge”. This means that, if we were up for it, our application could reside on the CDN.

This also means that, while we run dynamic JavaScript code that’s not server-side code in the classical sense, and it has a much better latency both in comparison to server-side apps and to classical FaaS services, our code is still not running in the browser, which means it’s not open to the public.

According to the words of its lead developer, Workers are the beginning of something that could develop into much more refined products in the future.

In many cases, perceived speed and efficiency are as good as if the execution was happening in the visitor’s browser, but without the processing overhead. It all happens in the cloud.

Comparable technology (which was available so far to users of NGINX) is Lua scripting — with the difference that Cloudflare executes workers’ code on its network of edge nodes, closest to the visitor.

Cloudflare has uploaded a number of code examples to a GitHub repo. Among them is a Slack bot, which fetches prices or cryptocurrencies from CoinMarketCap and caches them on the Cloudflare infrastructure. The code is very simple, and is available here. It demonstrates the main advantage of Cloudflare Workers — the simplicity of doing away with dealing with the entire software stack underneath the application.

Then there’s the more advanced example — the edge caching solution for WordPress — which gives a polished solution for caching, and purging the HTML output of WordPress, by putting together Cloudflare Workers, Workers KV (key-value store), and a plugin for WordPress, which all work in concert to make it possible to bypass the cache in case some cookies are present, to make atomic cache purging possible, and so on.

You can find out more about this example here.

Then there are code examples of using custom logic to put a layer of protection between the origin website and the Internet.

There is an example of using workers logic to rewrite 3rd-party scripts included in the web page HTML, to origin URLs with content hash, and then extending their browser cache, and also caching it on Cloudflare edge nodes — so there’s no need for three round trips to third-party servers for each script.

This can make a big performance difference in some cases, and the beauty of it is that workers use JavaScript — which means there’s a rich programmable interface for conjuring all the power of the Cloudflare infrastructure to do our bidding.

There are other code examples in their repository.

When we open the Cloudflare dashboard, there’s a Workers menu item among the icon-menu items on the top. 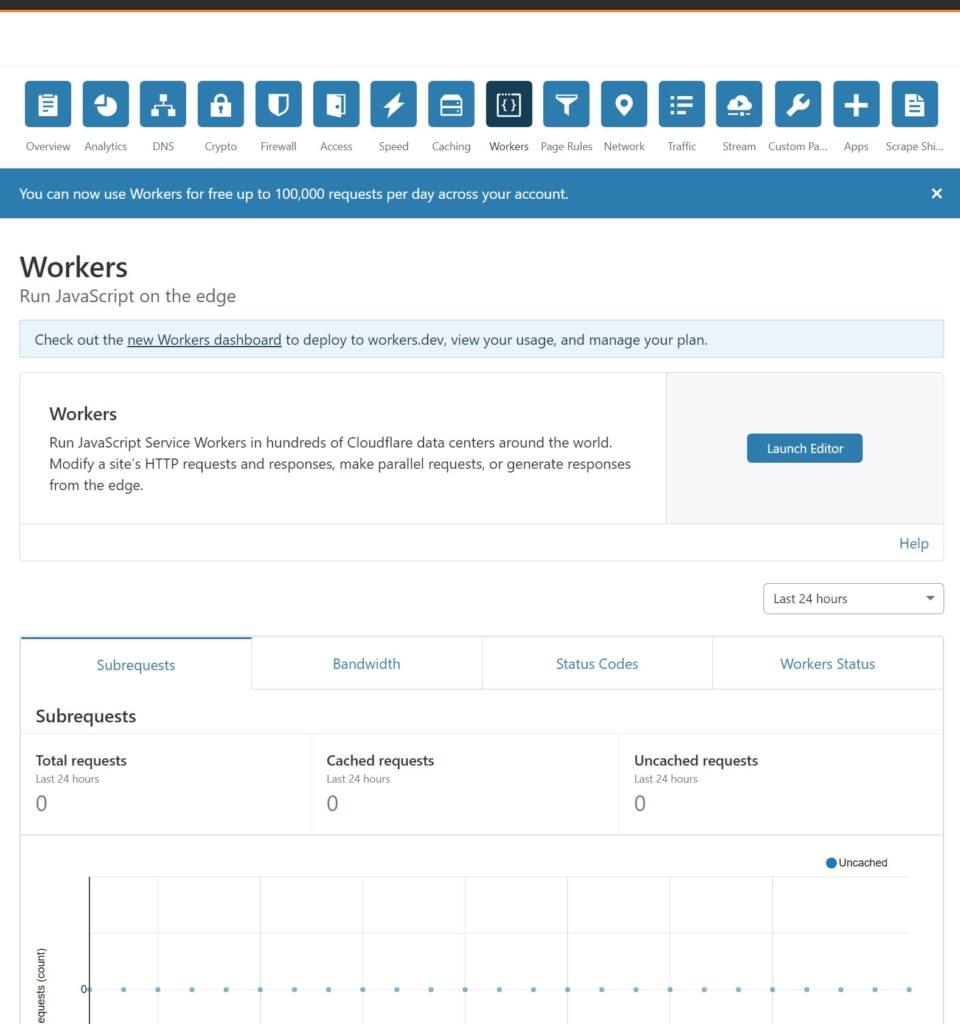 To start, we need to open the Workers dashboard link in the top, and we will need to set up a subdomain for our workers: 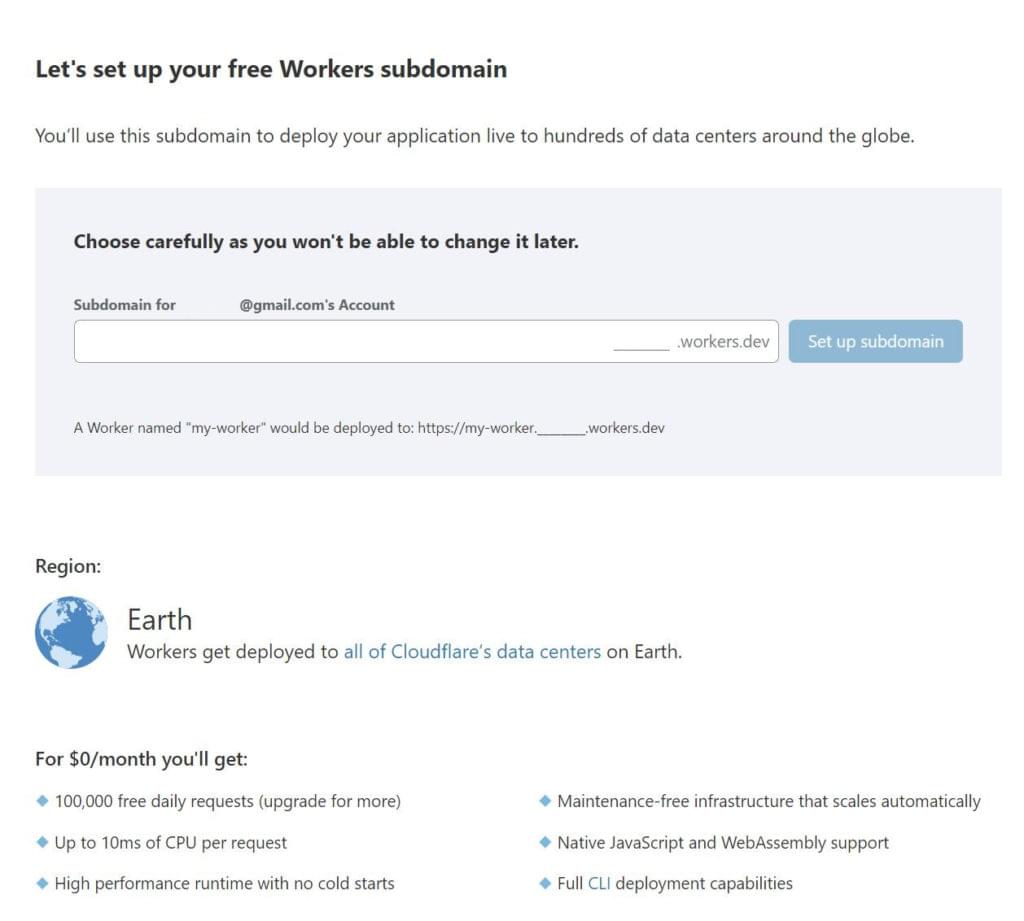 Then we’ll be presented with the workers dashboard, where we’ll be able to deploy new workers, monitor thier usage, and so on.

There’s also an editor, which we can use to edit the logic of the workers:

As we said, Workers use the JavaScript V8 engine, and — obviously — JavaScript syntax. The documentation is solid and detailed, and has a number of templates so we can jump-start our work.

For those of us who want the ability to put more logic into this layer, and want to squeeze more performance from this infrastructure, there’s more. In October 2018, Cloudflare announced support for WebAssembly for Workers — which means support for compiled languages like C, C++ and Rust. This makes Workers potentially very serious, if not game-changing contender in this space.

Serverless computing, with the conveniences it offers, is grabbing the attention of more and more developers. It gives them freedom to focus on application logic, and not to have to worry about the underlying libraries and software infrastructure.

Those of us who’ve had to handle hundreds of megabytes of npm libraries, who encountered the mess with versions of different dependencies, who had to install and work with Ruby Version Manager, or PyEnv, virtualenv, and similar delicacies, know the pain, and know that resolving these issues can take 80% of one’s work.

Serverless cloud offerings available today have found their market, and Cloudflare Workers are one of the most interesting products in this niche. I hope you’ve found this introduction useful! 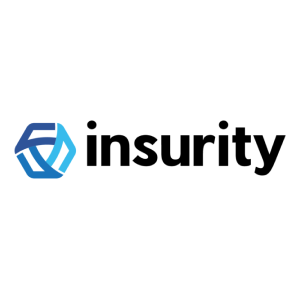 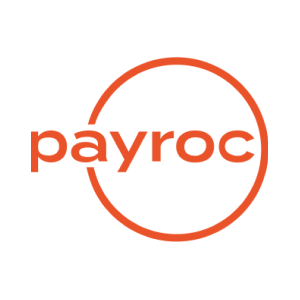 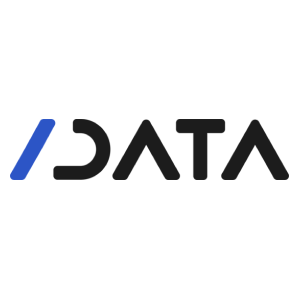