The browser market has been mostly static for a few months. Let’s check the latest figures from StatCounter?…

(The tables show market share estimates for desktop browsers. The ‘change’ column is the absolute increase or decrease in market share. The ‘relative’ column indicates the proportional change, i.e. 8.8% of IE9 users switched browsers last month. There are several caveats so I recommend you read How Browser Market Share is Calculated and StatCounter vs NetMarketShare.)

It’s the usual story. Chrome had the biggest jump and now stands a fraction under 50% of the market. Firefox and Opera dropped a little, but the biggest loser was Safari. Both the Mac OS and iPad versions decreased but Apple is unlikely to be concerned given their recent $13.6 billion quarterly profits!

The only other browser to make a gain was IE. Talking of which…

We’ve known about Microsoft’s new browser for some time. It has now received an official name: Microsoft Edge.

Does the new logo look familiar?… 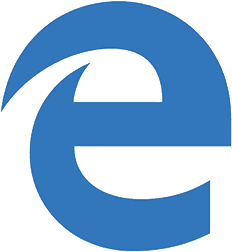 The name and logo are a little underwhelming. Perhaps Microsoft could have been more radical? That said, users rarely like major changes (Windows 8 anyone?) Here’s a look at a recent build of the browser to whet your appetite.

Mobile usage grew marginally to reach 33.47% of all web activity.

The mobile market remains lively and most users stick with the default browser on the device. For iPhone users, that’s Safari — Apple don’t permit other rendering engines. It dropped below 20% for the first time since December 2013. However, the iPhone remains exceptionally popular so it’s unlikely to be a long-term trend.

At the lower end of the chart, IEMobile has overtaken the ancient Nokia browser to become the sixth most-popular application. But 2.2% of the market is barely cause for a celebration. Perhaps Microsoft Edge will fare better?