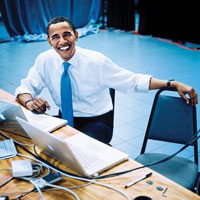 Tomorrow, Barack Obama will be sworn in as the 44th president of the United States and the first African-American chief executive of the country. That is indeed a historic moment in American politics and race relations, and Obama’s campaign certainly had a good deal of significance, especially in terms of how it utilized the Internet. The Internet will play a huge part in tomorrow’s inaugural festivities, but what has happened to the vast social networks that Obama built during that campaign? What will happen to them?

During the campaign, Obama and his team were able to build one of the most impressive online social networking apparatuses ever created. It probably can’t be understated how large a role Obama’s ability to connect directly with supporters played in propelling him to the White House. According to the Nation, for example, 25% of those who voted for Obama on November 5, 2008 were already linked to him via one (or more) of his online networks.

However, since the election, many of those networks have gone silent. Social presences that were previously updated almost daily have now been more or less abandoned. I can’t help but feel that Obama might be squandering an unprecedented opportunity to speak directly with his constituents.

Let’s look at the numbers.

Location: Facebook
Supporters: 3.8 million
Last use by Obama: January 5 (mini-feed), November 10 (notes), 5 months ago (photos) — and this is one of Obama’s most active social profiles

Location: YouTube
Subscribers: 151,000 (many more viewers, however)
Last use by Obama: Last video, 3 days ago (before that, 1 month ago)

Location: BlackPlanet.com
Friends: 491,000
Last use by Obama: One blog post January 16 (republished from elsewhere), before that non since November 5 — Most recent post has 0 comments (prior to that, most posts had at least 20)

And the same scene is repeated across the majority of Obama’s social profiles. There was a flurry of near daily activity up until the election, and since there has been essentially silence. To his credit, Obama and his team have continued to use some social tools during their transition into power.

Obama’s Change.gov site, for example, has utilized YouTube almost daily to post video addresses, behind the scenes interviews, speeches, etc. And the site features a open discussion forums for citizens to post ideas for the government under Obama.

Further, the Presidential Inauguration Committee has set up new Twitter, YouTube, and Flickr accounts to send out a steady stream of inaugural updates and information. The continued utilization of social networking features is impressive, however I can’t help but wonder: what about the networks Obama already built during the campaign? Rather than ignoring them, shouldn’t they be put to use? Shouldn’t the rest of the country (the just under half who didn’t vote for Obama) be encouraged to join and participate?

Just after the election, Adam Ostrow at Mashable wondered what what Obama would do with his massive social media influence. Ostrow suggested that Obama could use his networks for calls for service, calls for support (when trying to sell legislative packages to Congress), and eventually as part of a re-election organization effort in 2012. All good ideas, but so far, it doesn’t seem like he’s doing any of that.

Writes Evan Ratliff in this month’s Wired magazine, Obama promised a more high tech presidency: “He said he would expand government transparency by putting more data up on the Web, streaming meetings live, and letting the public comment on most legislation for five days before he signs it. He said he would bring blogs, wikis, and social networking tools with him into the executive branch—all overseen by a new national chief technology officer.”

Neglecting the vast social media networks he built up during the campaign seems like a bad way to start. Reviving his Twitter, MySpace, and Flickr accounts might not do much to inform policy decisions or radically increase the government’s transparency, but as Ratliff notes, it would “create a valuable intimacy with citizens.”

The value of Obama’s social networking prowess is its ability to keep citizens involved with government. The stat mentioned earlier, that 25% of Obama voters were already connected to him via some sort of social network is proof of that concept. Communication in 2009 happens via email, text message, and social networks. Obama, having tapped into those networks so well during his campaign, now has an amazing and unprecedented opportunity to directly connect with millions of citizens via those social networks and inspire them to action. I for one hope that he doesn’t squander that opportunity.