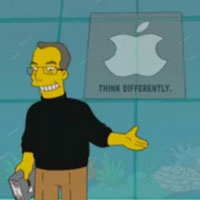 Just a day after TV’s The Simpson’s hilariously mocked Apple, the Cupertino, California-company is having the last laugh as the Internet share for their operating system is at a all-time high, at the expense of Windows, which has sunk to an all-time low. According to the Apple 2.0 blog, the Mac’s share of web hits reached almost 9% and set a record for the month of November.

IE’s slip, meanwhile, can be attributed mainly to gains by the Firefox browser, which finished the month above 20% of the first time ever. The reason Firefox saw such a huge jump in November, according to Net Applications, is because the browser enjoys increased use by residential users and the month was jam-packed with days in which business users would be surfing from home: the US election, the Thanksgiving holiday, and extra weekend days.

While Net Application’s net usage data doesn’t really measure “market share” in the traditional sense, the data should nonetheless be alarming for Microsoft. Even if Apple’s gains could be attributed to Apple users just using the net more than Windows users, and not to an actual shift in market share, given that the operating system of the future may be based in the web, that’s still bad news for Microsoft.

Edit: The clips got pulled from YouTube, so we’ve embedded the entire episode from Hulu below. This one won’t disappear, but it means you’ll have to watch other parts of the episode to see the bits where they lampoon Apple.

It’s a Hoax: IE Users Have a Lower IQ!Craig Buckler