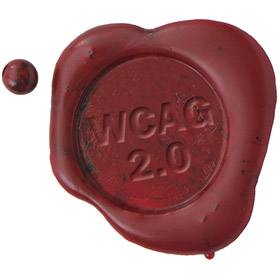 The Australian Government have announced their plan to adhere with the Web Content Accessibility Guidelines 2.0. All Government websites will require Level A compliance by 2012, and Double A by 2015. The new standard replaces replaces WCAG 1.0, which was introduced as a mandated requirement for agencies in 2000.

This is an important step in making democracy more open, accessible and accountable for all Australians.

The Australian government is progressively implementing new online technologies and looking to connect with more people online. These new standards will improve the ability of people with a broad range of disabilities to take up those opportunities and engage with the Government via the Internet.

It’s an ambitious project. Although many governments have accessibility legislation, few understand the implications or follow them through to implementation.

It’s a daunting read, especially if you’re used to following the WCAG 1.0 guidelines. Much of the original document was specific to HTML mark-up, e.g. don’t use tables for layout, ensure content can be read without stylesheets, avoid popups, etc.

WCAG 2.0 is based on a broader set of guidelines. It is not necessarily concerned with the technology, but how it is used. There are four basic principles:

Each principle contains 12 guidelines, with each guideline containing a number of success criteria pertaining to A, AA or AAA conformance.

Fortunately, there are a number of supporting documents and tools which make it easier to follow the guidelines:

If looks as though Australian developers have a little bedtime reading. But developers from other countries shouldn’t be too complacent — your Government will almost certainly adopt WCAG 2.0 if they haven’t already!

How to Idiomatically Use Global Variables in Rust