In the world of hybrid mobile apps, the team at AppGyver is doing some innovative work. They recently released Steroids2, their platform for building apps, along with Supersonic, a UI framework rooted in HTML5, AngularJS and web components. With the promise of performant hybrid apps blending HTML5 with native components, I was anxious to tryout AppGyver’s latest offerings.

AppGyver offers two options when building apps, Steroids or Composer. Steroids is a combination of a Command Line Interface (CLI) and a web app to generate, manage, compile and distribute projects. Apps can be setup as single or multi-page (i.e. multiple HTML files). Steroids generates new projects using a boilerplate setup or you can load their “Kitchensink” app which, you guessed it, includes all the bells and whistles from their Supersonic UI framework. From there, using your preferred IDE, you can modify and build on the boilerplate using your own code or loading available web components using a package manager like Bower. Running as a local server, Steroids detects app changes and will reload your app on a device or within a local iOS or Android emulator.

Composer is a completely visual, browser-based tool to bootstrap apps. While it has limitations, it excels at building apps quickly, with virtually no coding experience necessary.

I began by creating an AppGyver account and installing the Steroids Tooling. I was impressed at how smooth the process was. Steroids is compatible with numerous JavaScript frameworks such as AngularJS, Backbone, Ember and others. While it’s offered as a JS MVC agnostic platform, it’s written with AngularJS as its preferred front-end framework. 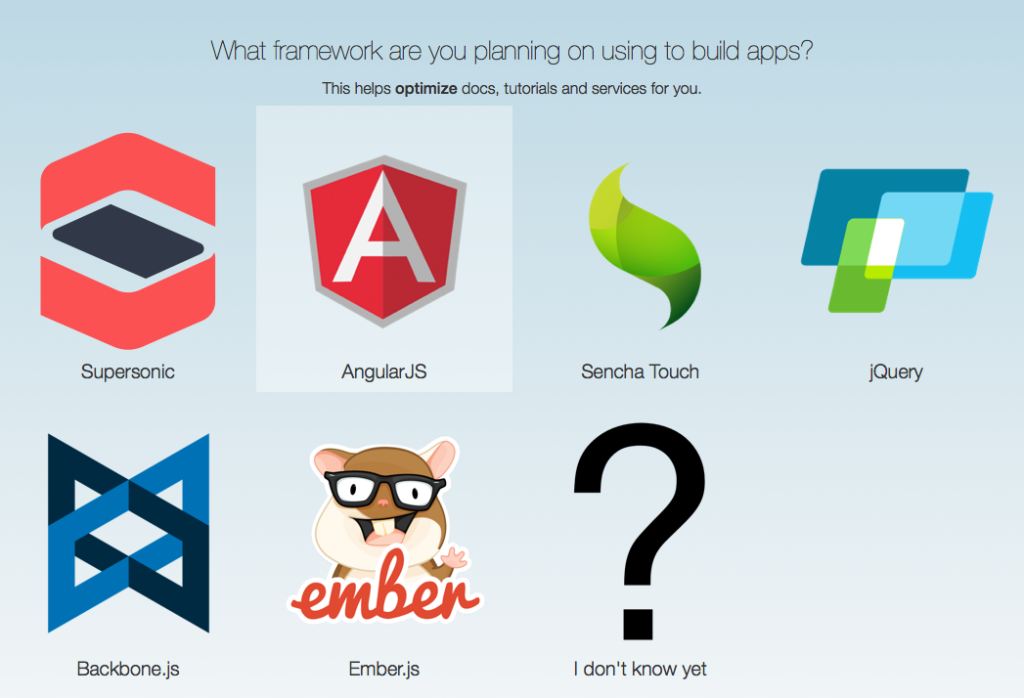 A screenshot of the framework selection. I chose Supersonic to get started, which works seamlessly with AngularJS.

After verifying some dependencies (Node, Git, Xcode), I was able to dive into coding in about 10 minutes.

If you’re fluent in Angular and web components, working with Steroids should feel natural.

For development, I stuck to AppGyver’s getting started tutorials. Not being well versed in Angular, I was limited in my ability to do anything outside the realm of AppGyver’s tutorials, but again, one isn’t forced to use Angular.

After playing with Steroids I decided to give Composer, AppGyver’s visual app builder, a whirl. Composer is intuitive and has a low learning curve. It comes with a library of common UI components such as form elements, images, panels, lists, buttons and the ability to add custom HTML. These components come to life via a visual logic editor where many interaction controls and conditional logic can be configured. One only needs a basic understanding of programming principles to create some relatively complex logic. Composer uses the same data integration tools as Steroids, with the added convenience of binding data to its library of components.

Using AppGyver’s Scanner app (for iOS and Android), they’ve made it easy to share apps with others. Each app comes with a QR Code accessible via the web. Scan the code and the Scanner app acts as a wrapper to load the app on your device. No need to use Apple’s TestFlight or a service like Crashlytics to distribute pre-release builds to stakeholders, test users or clients.

When you’re ready to push to app stores, AppGyver has also made it a simple process. After entering the necessary information (certificates, icons, splash screen creative, etc.), their cloud based deployment service will generate a build ready to submit to the App Store or Google Play.

Having been a lead strategist and project manager for both native and hybrid app initiatives using numerous frameworks, I believe AppGyver is leading the pack in hybrid app innovation. Notable benefits:

I don’t have a lot of criticism of AppGyver. Where the platform lacks polish it makes up for in functionality. A few thoughts:

If you’re fluent in AngularJS or another JS MVC, you’ll feel right at home with AppGyver. If not, Composer is a viable option—either as a way to bootstrap your app idea and finish it off using Steroids, or to build your app idea from concept to finished product. With a short setup time, formidable data handling, easy distribution and native-like performance, there’s no reason not to give AppGyver’s offerings a try.

Meet the author
Dave Albert
David Albert is the author of Tapping In - 21 Viral Strategies For Building Viral Mobile Apps People Will Love and a co-founder of Greygoo, a digital product development firm in Chicago.
Start a discussion