A little over a year ago, at their annual MAX event held last year in Chicago, Adobe demoed an application they had under production codenamed “Thermo,” that was instantly the talk of the conference — and for good reason. Thermo was a jaw-dropping and potentially game changing application that would drastically simplify the designer-to-developer work flow for Flex-based applications by allowing non-coders to create rich Internet application user interfaces.

Today, at the 2008 MAX conference, this year taking place in San Francisco, Thermo emerges for public consumption under its official title, Adobe Flash Catalyst. A preview version is available for MAX attendees today, and a public beta will be put up on Adobe’s Labs site early next year. 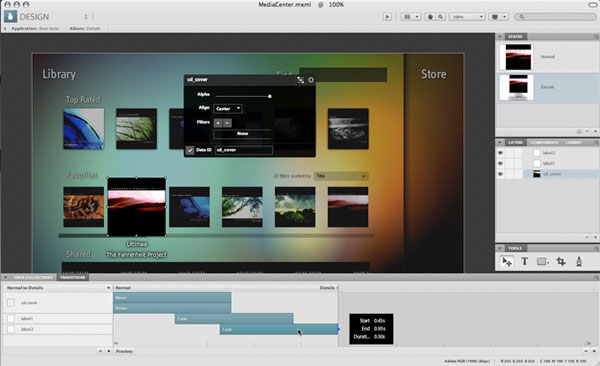 Flash Catalyst is a very impressive application that allows designers to import a UI created in another Adobe CS tool, such as Photoshop or Illustrator, and then automagically writes the MXML code to make the interface work.

The application can take a layered graphic from Photoshop, for example, and a designer can use Flash Catalyst’s “Convert artwork to” function to turn mockups of buttons, scroll bars, and text inputs into actual, functional UI elements, with the underlying code all ready to go. From there, a developer can hook the UI up to the business logic and back end code of the application. The goal, says Adobe, is to simplify the work flow between designers and developers.

You can think of Flash Catalyst as a smarter Visual Basic for the web, allowing front end code to be created without the need to actually write any code (though jumping into a code view to hand edit bits is possible). Because Flash Catalyst integrates seamlessly with the Adobe CS family of design tools and with Flex Builder, it will allow designers and developers to work together on Flash-based rich Internet applications in ways that haven’t previously been possible. Designers no longer need to have some coding knowledge in order to hook up front ends, and conversely, developers no longer need to have design experience in order to make UI functionality match up with how it looks. 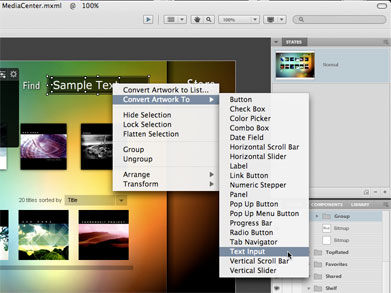 Rather, designers can work on user interface elements, while developers focus on business logic, and the transition of assets between the two is more or less seamless. Flash Catalyst removes a lot of friction between designers and developers.

Last year at MAX, Thermo was easily the most buzzed about product that Adobe showed off. It’s great to see things come full circle and have Adobe so close to a public release of Flash Catalyst. Adobe has a preview video up on Labs, and the screenshots in this article (above) are of the pre-release Thermo version of the application.