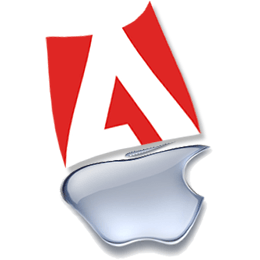 The gloves are off! Kevin Lynch, Adobe CTO, has hit back following Steve Jobs’ accusations that Flash is buggy and Adobe developers are lazy. He makes several interesting comments on the official Adobe blog…

Flash was originally designed for pen computing tablets, about 15 years before that market was ready to take off.

I hadn’t realized that. Flash evolved from SmartSketch, a drawing application for PenPoint OS — an early tablet-based operating system.

By augmenting the capabilities of HTML, Flash has been incredibly successful in its adoption, with over 85% of the top web sites containing Flash content and Flash running on over 98% of computers on the Web.

A 98% adoption rate sounds reasonable, but 85% of the top websites? I guess it’s probably correct given the top 20 will include YouTube, Facebook and several others featuring video and annoying adverts. However, Flash has a far smaller penetration when you consider global website technology statistics.

We are now on the verge of delivering Flash Player 10.1 for smartphones with all but one of the top manufacturers.

I wonder who he means?

So, what about Flash running on Apple devices?

We have shown that Flash technology is starting to work on these devices today by enabling standalone applications for the iPhone to be built on Flash … some of these apps are already available in the Apple App Store … This same solution will work on the iPad as well.

I don’t doubt it. Apple can hardly claim Flash is too slow for their platform when it works on less powerful devices.

Longer term, some point to HTML as eventually supplanting the need for Flash, particularly with the more recent developments coming in HTML with version 5. I don’t see this as one replacing the other, certainly not today nor even in the foreseeable future.

If HTML could reliably do everything Flash does that would certainly save us a lot of effort, but that does not appear to be coming to pass. Even in the case of video … the coming HTML video implementations cannot agree on a common format. With the ability to update the majority of Web clients in less than a year, Flash can make this innovation available to our customers much more quickly than HTML across a variety of browsers.

Well, he would say that — especially with Adobe shareholders listening — but Kevin has a point. HTML5, CSS3, JavaScript and other standards-based technologies have the potential to supersede Flash. However, the specifications are in a state of flux and cross-browser development is currently impossible. In addition, mature Flash tools are available which allow designers to create effects without programming knowledge. The same cannot be said for HTML5.

Open access has proven to be more effective in the long term than a walled approach, where a manufacturer tries to determine what users are able to see or approves and disapproves individual content and applications. We strongly believe the Web should remain an open environment with consistent access to content and applications regardless of your viewing device.

This is a good point. Apple want to provide a great user experience to their customers, but should any OS manufacturer be able to dictate which applications are developed for and used on their platform?

That said, Apple has made some valid criticisms. Flash is bloated and buggy on some systems, with the Mac OS X version receiving a high number of complaints. While Flash may be ubiquitous, it’s not an open standard — Adobe have their own “walled approach”.

But the public mud-slinging will not benefit Apple or Adobe. Users who agree with Apple now have a negative opinion of Flash technology. Those that consider Flash to be an essential part of modern web browsing won’t buy an iPad. Both companies will lose.

In my opinion, Apple should let their users decide. Permit Adobe to produce an iPhone/iPad Flash player and allow anyone to install it at will. They’ll soon uninstall the software if it’s bloated, buggy or slow. Whether Apple are eager to give up their App Store monopoly is another matter.