In this tutorial, I’ll be going over all the steps the auto-placement algorithm of the CSS Grid Layout module follows when positioning elements. These steps are controlled by the grid-auto-flow property.

In Introducing the CSS Grid Layout and Seven Ways You Can Place Elements Using CSS Grid Layout, I gave an overview of the CSS Grid spec and explained all the different ways Grid lets you arrange elements on the web. However, in my previous articles I explicitly specified the position of just one element in the grid. As for the rest of the items, they got placed properly based on an algorithm.

Here, I am going to show you how this algorithm works. This way, the next time an element ends up in an unexpected location, you are not left scratching your head wondering what just happened.

Basic Concepts for a Better Grasp of the Auto-placement Algorithm

Let’s go over some fundamental concepts before diving into the workings of the algorithm.

Finally, I’d like to make the following preliminary point. The default value of the grid-auto-flow property, which is the property controlling the algorithm, is row. This is also the value I am going to assume in the following explanation of the auto-placement algorithm. On the other hand, if you explicitly set the above property to column, remember to replace instances of the term row with the term column in my explanation of the algorithm. For example, the step “Placement of Elements With a Set Row Position but No Set Column Position” will become “Placement of Elements With a Set Column Position but No Set Row Position”.

Now, enable the experimental features flag in your favorite modern browser to follow along and let’s go over the details of all the steps the algorithm follows to build the layout.

The first thing that happens when the algorithm is trying to place all the items inside a grid is the creation of anonymous grid items. As I mentioned earlier, you cannot style these elements because there is no item to apply the style to.

The markup below generates an anonymous grid item from the inter-element text:

Besides the generation of an anonymous item, one more thing to notice in the demo below is that the grid placement algorithm ignores the CSS floats applied to div 2 and div 4 .

Step #2: Placement of Elements with an Explicitly Specified Position

For this and the next few steps, I will be using a grid of nine different items to show how they are going to be placed.

The first items to be placed in the grid are those with an explicitly set position, which in the example below are items A and B. Just ignore all other items in the grid for now. Here is the CSS that explicitly sets the position of A and B: The algorithm positions items A and B according to the values of their respective grid-area property. In particular, the algorithm:

The demo below illustrates the final placement of A and B after this step:

See the Pen Placing Elements with Explicit Positions by SitePoint (@SitePoint) on CodePen.

Step #3: Placement of Elements With a Set Row Position but No Set Column Position

Next, the algorithm places the elements whose row position has been set explicitly by using the grid-row-start and grid-row-end properties.

For this example, I will be setting only the grid-row values of item C and item D to give them a definite row position. Here is the CSS for placing both of them:

To determine the column position, which is not explicitly set, the algorithm behaves in one of two ways, according to the packing mode:

This is the default behavior. The column-start line of our item will be set to the smallest possible line index which ensures that there won’t be any overlap between the item’s own grid area and the cells already occupied by other items. The column-start line also needs to be past any other item already placed in this row by this step. Please note that I wrote by this step and not until this step. 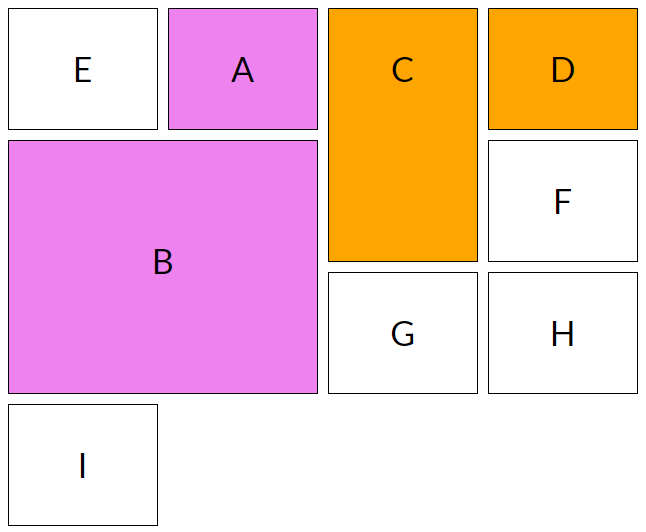 To clarify this point further, item D in the demo below did not move to the left of item A, even though it could fit in there without any overlap. This is due to the fact that the algorithm does not allow any item with an explicitly set row position but not set column position to be placed before any other similarly positioned item in that specific row (item C in this case). In fact, if you remove the grid-row rules applied to item C, then item D will move to the left of item A.

If you want to fill that empty space before item A with item D, you will have to set the value of the grid-auto-flow property to row dense. 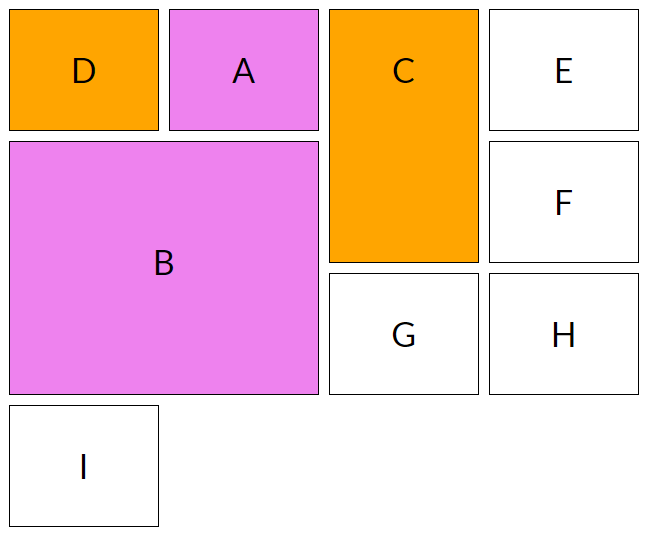 In this case too, the column-start line is placed at the smallest index which does not cause any overlap with other grid items. The only difference is that this time, if there is some empty space in a row where our element can fit without any overlap, it will be placed in that position, without considering the previous item in the same row with the same position rules (in this case item C).

Step #4: Determining the Number of Columns in the Implicit Grid

Next, the algorithm tries to determine the number of columns in the implicit grid. This is done by following a series of steps:

At this point, the algorithm has placed all the items whose position has been explicitly specified as well as items whose row positions are known. Now, it will position all other remaining items in the grid.

Once more, the packing mode, determined by the value of the grid-auto-flow property, controls how these items are positioned.

By default, the remaining items are placed sparsely. Here is the process the algorithm follows to place them.

If the item has no definite position in either axis:

If the item has a definite column position:

Let’s clarify the steps listed above with what’s happening in the following demo. When the algorithm deals with item E, which has no explicitly set column or row position, the auto-placement cursor is set to row 1 and column 1. Item E occupies just one cell and it can fit in the top left corner without any overlap. Therefore, the algorithm simply places item E at position row 1 / column 1.

Placement of Items G and H with a Definite Column Position

The remaining items with a definite column position in our demo are G and H. Let’s examine G. The column position of the auto-placement cursor is set to be equal to the value of the grid-column-start property for item G, which is 3. Since this new value is less than the previous column value (which was 4), the row position is increased by one. The current row and column positions are now 3 and 3 respectively. The space at row 3 and column 3 is currently empty and item G can be placed there without any overlap. Therefore, the algorithm places item G there. The same steps are then repeated for the placement of item H.

Things are handled a bit differently when the grid-auto-flow property is set to row dense. When placing a grid item with no definite position, the cursor’s current position is set to the start-most row and column line in the implicit grid before the item’s position is determined. 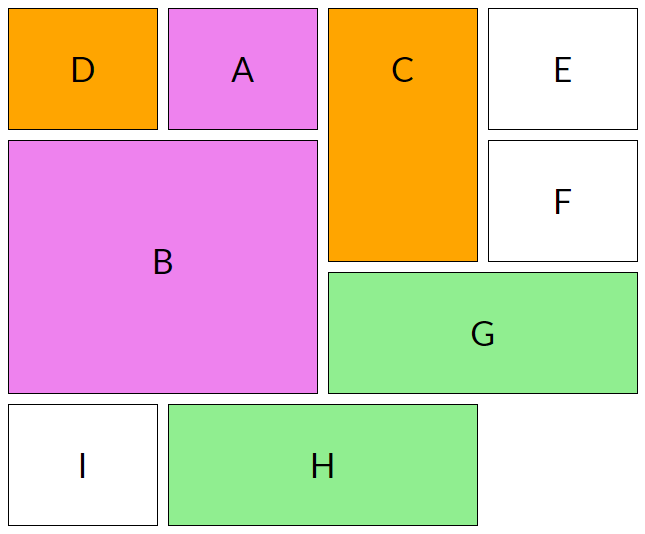 Unlike the previous example, item I is placed to the left of item H because the cursor position gets reset to the start-most row and column line in the implicit grid instead of starting from the last item placed. At this point, while looking for a suitable position to place item I without any overlap, the cursor finds the spot to the left of item H and places it there.

In this article, I went over all the steps followed by the auto-placement algorithm of the CSS Grid Layout module, controlled by the grid-auto-flow property.

Have a go at figuring out the final position of different items in a few other layouts of your own to get a better understanding of the algorithm.

If you have any questions related to this article, let me know in the comments.

SitePoint NFTs – or how we floated rhinos on the OpenSea
Blogs

Read SitePoint NFTs - or how we floated rhinos on the OpenSea and learn Web with SitePoint. Our foray into the dynamic and fast evolving world of NFTs begins with Rhinos on OpenSea.

Is Magento 2 Migration Worth It? The Process Explained
Web

Magento 1 is out of date. Are you ready for Magento 2 migration? Learn why it's important, the steps involved, and how long it will take.

Back to Basics: Understanding the for…in Loop in JavaScript
Web

Learn about for...in loops in JavaScript: their syntax, how they work, when to use them, when not to use them, and what you can use instead.